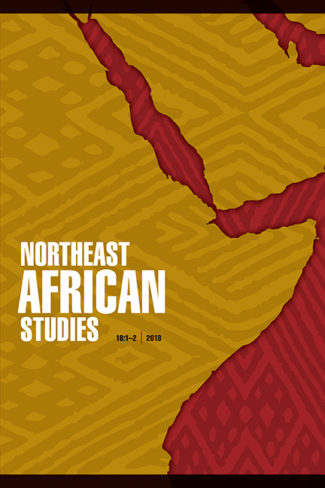 See the latest from NEAS on these platforms. Become an online subscriber for full access or purchase access to individual issues and articles.

Northeast African Studies (NEAS) is a biannual interdisciplinary peer-reviewed journal that publishes high-quality original research in the social sciences and the humanities on the Horn of Africa and its neighbors. The region covers primarily Ethiopia, Eritrea, Sudan, South Sudan, Djibouti, and Somalia/Somaliland. We welcome submissions from a range of academic disciplines including history, anthropology, political science, sociology, religion, environmental studies, literature, and the arts. NEAS editors seek contributions that rethink established debates and paradigms in the field, that address issues with comparative implications for scholars working in other parts of the world, or that draw on new source materials and disciplinary methodologies. We are highly interested in studies adopting transnational, transregional, and comparative perspectives as well as a regional approach to Northeast Africa that transcends the conventional borders of individual countries. Studies that explore the region’s broader interactions with the Red Sea and Indian Ocean areas, the adjacent Arabian Peninsula, relevant Trans-Saharan connections, or that converse with global history approaches are particularly welcome.

We invite submission of article-length manuscripts accompanied by an abstract not exceeding 150 words.

FOLLOW ABOVE LINK FOR DETAILED SUBMISSION GUIDELINES AND INSTRUCTIONS.

This distinguished journal seeks to publish scholarly articles on all aspects of Northeast African studies, including but not limited to works in the social sciences and humanities. We particularly welcome contributions that rethink established debates and paradigms in the field, that address issues with comparative implications for scholars working in other parts of the world, or that draw upon new or underutilized source materials and disciplinary methodologies.

We consider Northeast Africa to include the Nile Valley, the Red Sea, and the lands adjacent to both, and so invite articles on patterns and processes that characterize the region as a whole. We hope to make Northeast African Studies a “must-read” journal not only for other area specialists but also for those engaged in comparative and transnational studies.

We will actively encourage submissions from Africa-based researchers, as well as papers based on collaborative research by African and overseas scholars.

Articles accepted for publication cannot go to print without a signed publishing agreement:

At this time we are calling for proposals for special issues to appear in 2021 and 2022. A special issue can include anywhere between four and ten single articles focusing on a specific theme.

Possible issue themes include, but are not limited to