A Journal in GLBTQ Worldmaking 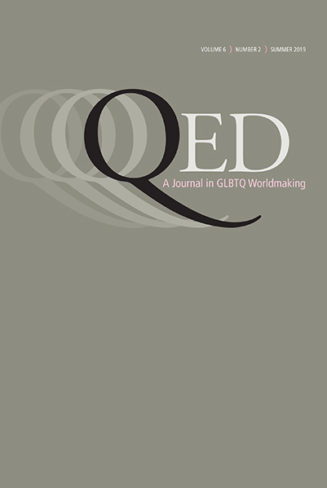 QED: A Journal in GLBTQ Worldmaking (published 3 times/yr.) brings together scholars, activists, public intellectuals, artists, and policy and culture makers to discuss, debate, and mobilize issues and initiatives that matter to the diverse lived experience, struggle, and transformation of GLBTQ peoples and communities wherever they may be. With an emphasis on worldmaking praxis, QED welcomes theory, criticism, history, policy analysis, public argument, and creative exhibition, seeking to foster intellectual and activist work through essays, commentaries, interviews, roundtable discussions, and book and event reviews.

QED is not an acronym, though, of course, Q resonates queerly for us, as we imagine it will for many readers. We wish our intentional indeterminacy to be playful, productive, propulsive. This configuration will be recognized by some as signifying the Latin phrase, quod erat demonstrandum, meaning “that which had to be demonstrated,” which used to be placed at the end of mathematical proofs to inscribe a stamp of consummation. This connotation appeals to us insofar as we understand this journal’s mission as centrally concerned with praxis, which is to say that we believe the success of QED generally, and of any of the words on its pages, shall be determined by its demonstration, by the difference it seeks to manifest in the world. We hope that this high bar, this idealism, will be constitutive. Other readers, though lamentably too few given the infrastructural deficits vexing GLBTQ history and memory, will recognize Q.E.D. as the title of Gertrude Stein’s explicitly lesbian autobiographical novel, written in 1903 but not published until after her death in 1950. Stein’s use of the acronym ironically represented the relations among the women that unfolded in her narrative. Activism, archive, wit, desire—our hope is that all of these terms will, among others, characterize this GLBTQ project, and that you will venture to make other meanings and doings of it.

Our use of theterm “worldmaking” is much more deliberate in its derivation. Since our first encounter 15 years ago with its conceptualization by queer theorists Lauren Berlant and Michael Warner in their influential essay, “Sex in Public,” we have been inspired and challenged by the still generative and demanding implications of their idea of “queer worldmaking”—creative, performative, intimate, public, disruptive, utopian, and more. Of such a “world-making project,” they wrote: “The queer world is a space of entrances, exits, unsystematized lines of acquaintance, projected horizons, typifying examples, alternate routes, blockages, incommensurate geographies.” Among its key assumptions and commitments are belonging, transformation, memory, mobility, “the inventiveness of the queer world making and of the queer world’s fragility.” GLBTQ people, through complex theory, artful exhibition, street activism, and practices of everyday life, have richly embodied, interrogated, and extended this concept. Our appropriation of it is dedicatory and aspirational.

Featured Articles: Read for Free on MUSE and JSTOR

Pamela VanHaitsma, "Stories of Straightening Up: Reading Femmes in the Archives of Romantic Friendship" (MUSE) (JSTOR)

Bernadette Marie Calafell, "Narrative Authority, Theory in the Flesh, and the Fight over The Death and Life of Marsha P. Johnson" (MUSE) (JSTOR)

Qwo-Li Driskill, "All Power to the People: A Gay Liberation Triptych" (MUSE) (JSTOR)

Leah Lakshmi Piepzna- Samarasinha, "Disability Justice/Stonewall's Legacy, or: Love Mad Trans Black Women When They Are Alive and Dead, Let Their Revolutions Teach Your Resistance All the Time" (MUSE) (JSTOR)

Submissions are accepted only in MS-Word format. Upon creating an account, you will be asked to enter information about yourself and your article. There should be no identifying information [i.e. the name(s), affiliation(s) of the author(s)] in the document itself for purposes of blind review. Upload files containing all tables and figures as supplemental materials. Retain both print and electronic copies of your work to guard against loss in transit. A confirmation note will be sent immediately after the submission is received. Illustrated submission instructions available.

BOOK REVIEWS: Standard Book Reviews for QED should be 800–1,200 words although, depending on the book being reviewed, they may be shorter or longer. Book reviewers should discuss the length of the review with the Book Review Editor before writing. Reviews should be accessibly written with an audience in mind that is comprised of academics, activists, and artists interested in GLBTQ issues. Inquiries should be sent to: Shinsuke Eguchi, Book Review Editor.

All manuscripts submitted for publication must be original work that has not been published previously and is not currently under consideration by any other publication. All contributions will be peer reviewed by QED Editorial Board members and external reviewers. Response time is typically three months from date of submission. Contributions are accepted on a rolling basis. Authors must be willing to respond to reviewers’ comments, make revisions, and review page proofs in a timely manner. A tentative schedule will be provided at time of submission acceptance.

QED follows the Chicago Manual of Style, 16th ed., and uses endnote-style citations. Refer to the to the QED Style Sheet to prepare your manuscript for submission.

The MSU Press journals program bases our ethics practices on those suggested by the Committee of Publication Ethics (COPE). For a summary of our core principles, see this document. Learn more at publicationethics.org.