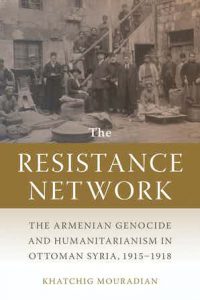 The Resistance Network The Armenian Genocide and Humanitarianism in Ottoman Syria, 1915-1918: A Talk with Author Khatchig Mouradian

Please join us for a special evening with Dr. Khatchig Mouradian. In his new book from the MSU Press, The Resistance Network, Dr. Mouradian presents a social history of genocide and resistance in wartime Aleppo and a network of transit and concentration camps. Come hear an entirely new account of the Armenian Genocide as it took place in Syria. Mouradian challenges depictions of Armenians as passive victims of violence and subjects of humanitarianism, demonstrating the key role they played in organizing a humanitarian resistance against the destruction of their people.

Khatchig Mouradian, PhD, is a lecturer in Middle Eastern, South Asian, and African Studies at Columbia University, and the Armenian and Georgian Area Specialist at the Library of Congress (African and Middle Eastern Division).

Book signing available at the conclusion of the program.