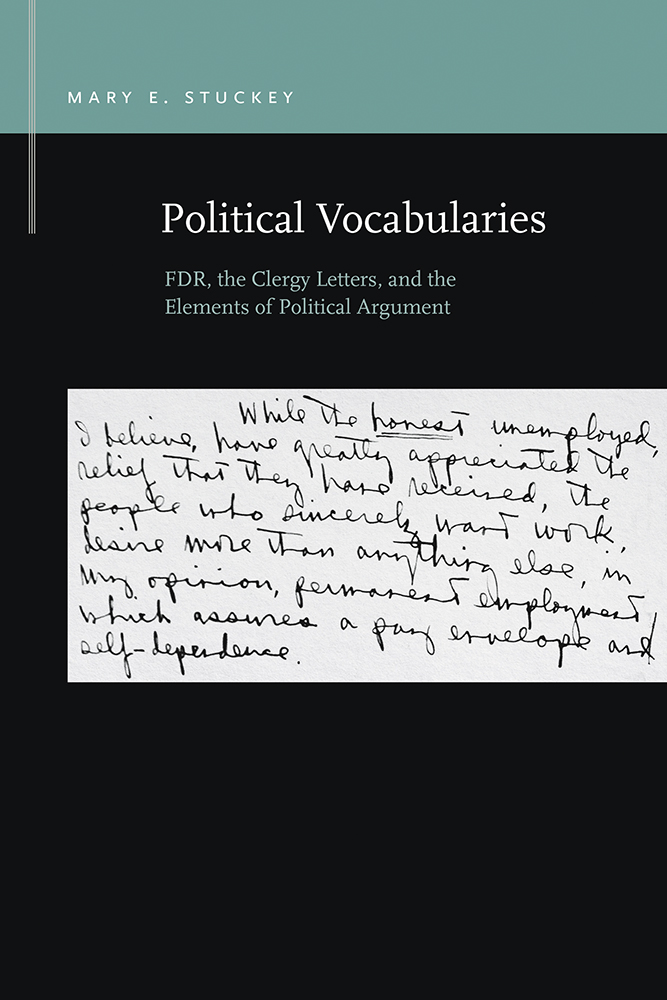 Political Vocabularies: FDR, the Clergy Letters, and the Elements of Political Argument uses a set of letters sent to Franklin D. Roosevelt in 1935 by American clergymen to make a larger argument about the rhetorical processes of our national politics. At any given moment, national politics are constituted by competing political imaginaries, through which citizens understand and participate in politics. Different imaginaries locate political authority in different places, and so political authority is very much a site of dispute between differing political vocabularies. Opposing political vocabularies are grounded in opposing characterizations of the specific political moment, its central issues, and its citizens, for we cannot imagine a political community without populating it and giving it purpose. These issues and people are hierarchically ordered, which provides the imaginary with a sense of internal cohesion and which also is a central point of disputation between competing vocabularies in a specific epoch. Each vocabulary is grounded in a political tradition, read through our national myths, which authorize the visions of national identity and purpose and which contain significant deliberative aspects, for each vision of the nation impels distinct political imperatives. Such imaginaries are our political priorities in action. Taking one specific moment of political change, the author illuminates the larger processes of change, competition, and stability in national politics.
Subjects: History | Political Science | Rhetoric
Series: Rhetoric & Public Affairs
Publication Date: March 1st, 2018
298 pages| 6 in x 9 in
Michigan State University Press
Bios
MARY E. STUCKEY is Professor of Communication Arts and Sciences at Pennsylvania State University, specializing in political and presidential rhetoric, political communication, and American Indian politics. She is the author, editor, or coeditor of twelve books and author or coauthor of roughly eighty essays and book chapters.

“In Political Vocabularies: FDR, the Clergy Letters, and the Elements of Political Argument, Mary Stuckey displays her usual sensitivity to historical context, rhetorical nuance, and political innovation and change. In analyzing a remarkable collection of letters to FDR from more than 8,000 members of the U.S. clergy during the Great Depression, she helps chart the rich and vibrant contours of political opinion during this time of turmoil and transformation. This is a smart and engaging book, one that makes important contributions to not only our understanding of this critical period in U.S. history, but also to theories of democratic deliberation and public opinion.”
—J. MICHAEL HOGAN, Edwin Erle Sparks Professor Emeritus of Rhetoric, Penn State University

“In this important and timely book, Mary Stuckey explains how political realignments are both enabled and reflected in shifting political discourses that reimagine authority, recast identity, and reformulate public policy. Her compelling case study illuminates an important historical period and sheds light on our own. We may not always be able to predict political change, but scholars and citizens alike need to understand its dynamics and significance. Towards this end, this text is an indispensable resource.”
—ROBERT ASEN, Professor of Rhetoric, Politics, and Culture, Department of Communication Arts, University of Wisconsin–Madison, and author of Democracy,
Deliberation, and Education

“This book provides a comprehensive look at these letters, sampling those written on a variety of topics: the economy, social and welfare policy, the repeal of prohibition, and foreign affairs to identify the most prominent. Stuckey also illustrates a variety of rhetorical moves: establishing authority, characterizing or depicting reality, offering definitions of ambiguous situations, appealing to national myths, and recommending specific policies. Political Vocabularies: FDR, the Clergy Letters, and the Elements of Political Argument provides the reader with a good sense of the granularity of this discourse. It thoroughly answers the question, “What did the clergy letters say?”
—DAVID H. ZAREFSKY, Professor Emeritus, Communication Studies, Northwestern University

“Mary Stuckey takes what appears to be a most conventional set of messages—letters written by religious leaders in response to FDR’s 1935 query on how the government might better serve their communities—and sheds extraordinary light on the New Deal realignment by analyzing its rhetorical markers in the form of competing political vocabularies offered by these clergy. Stuckey’s study not only provides greater clarity on the New Deal, but also has relevance for understanding the political vocabularies contending for acceptance in American politics today.”
—DENISE M. BOSTDORFF, Professor of Communication, College of Wooster, and author of The Presidency and the Rhetoric of Foreign Crisis and Proclaiming the Truman Doctrine: The Cold War Call to Arms

INTERVIEW: TIME magazine, July 02, 2018, "A Reckoning After Trump's Border Separation Policy: What Kind of Country Are We?"

The Good Neighbor
Franklin D. Roosevelt and the Rhetoric of American Power