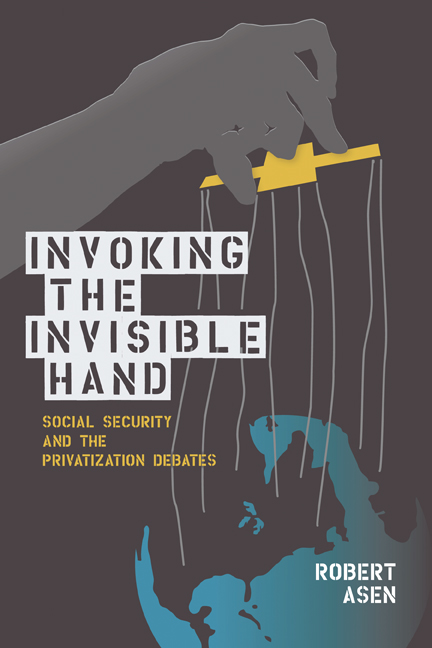 In Invoking the Invisible Hand Robert Asen scrutinizes contemporary debates over proposals to privatize Social Security. Asen argues that a rights-based rhetoric employed by Social Security's original supporters enabled advocates of privatization to align their proposals with the widely held belief that Social Security functions simply as a return on a worker's contributions and that it is not, in fact, a social insurance program.
By analyzing major debates over a preeminent American institution, Asen reveals the ways in which language is deployed to identify problems for public policy, craft policy solutions, and promote policies to the populace. He shows how debate participants seek to create favorable contexts for their preferred policies and how they connect these policies to idealized images of the nation.

Subjects: Rhetoric
Series: Rhetoric & Public Affairs
Publication Date: March 2nd, 2009
322 pages| 6 in x 9 in
Michigan State University Press
Bios
Robert Asen is Professor, Communication Arts Department, and an affiliate at the Institute for Research on Poverty at the University of Wisconsin-Madison. In 2010, he received the National Communication Association Winans-Wichelns Award.

WINNER: 2010 National Communication Association Marie Hochmuth Nichols Award to Robert Asen for Invoking the Invisible Hand
In 2010, Asen received the NCA Winans-Wichelns Memorial Award for Distinguished Scholarship in Rhetoric and Public Address, and the Marie Hochmuth Nichols Award from the NCA Public Address Division.
In 2011, Invoking the Invisible Hand received the Kohrs-Campbell Prize in Rhetorical Criticism, one of the largest awards ever established to sustain and advance the study of rhetoric in American higher education.