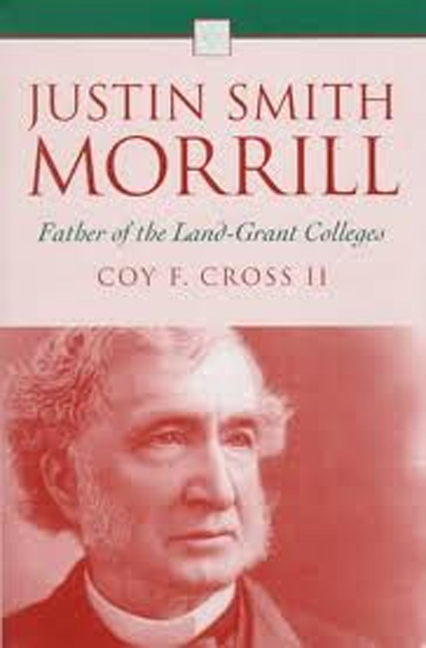 Smith Morrill: Almost every land-grant college or university in the United States has a building named for him; but are his contributions truly recognized and understood? Here is the first biography on this renowned statesman in six decades. Representative and then senator from Vermont, Morrill began his tenure in Congress in 1855 and served continuously for forty-three years. His thirty- one years in the upper chamber alone earned him the title "Father of the Senate." Coy F. Cross reveals a complex and influential political figure who, as chair of the House Ways and Means Committee, and then the Senate Finance Committee, influenced American economic policy for nearly fifty years.
Morrill's most-recognized achievements are the pieces of legislation that bear his name: the Morrill land-grant college acts of 1862 and 1890. His legacy, inspired by the Jeffersonian ideal of an educated electorate, revolutionized American higher education. Prior to this legislation, colleges and universities were open primarily to affluent white men and studies were limited largely to medicine, theology, and philosophy. Morrill's land-grant acts eventually opened American higher education to the working class, women, minorities, and immigrants. Since 1862, more than 20 million people have graduated from the 104 land-grant colleges and universities spawned by his grand vision. In this long-overdue study, Cross shows the "Father of Land-Grant Colleges" to be one of America's formative nineteenth- century political figures.