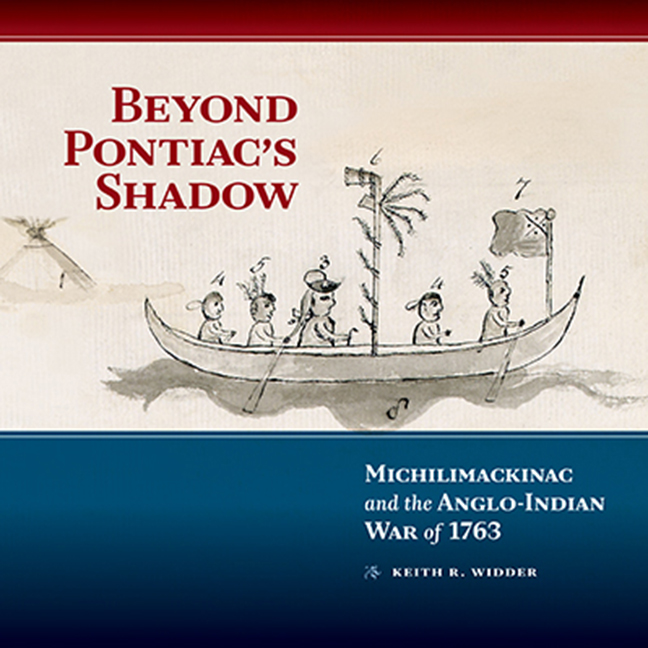 Beyond Pontiac's Shadow
Michilimackinac and the Anglo-Indian War of 1763
Keith R. Widder

On June 2, 1763, the Ojibwe captured Michigan’s Fort Michilimackinac from the British. Ojibwe warriors from villages on Mackinac Island and along the Cheboygan River had surprised the unsuspecting garrison while playing a game of baggatiway. On the heels of the capture, Odawa from nearby L’Arbre Croche arrived to rescue British prisoners, setting into motion a complicated series of negotiations among Ojibwe, Odawa, and Menominee and other Indians from Wisconsin. Because nearly all Native people in the Michilimackinac borderland had allied themselves with the British before the attack, they refused to join the Michilimackinac Ojibwe in their effort to oust the British from the upper country; the turmoil effectively halted the fur trade. Beyond Pontiac’s Shadow examines the circumstances leading up to the attack and the course of events in the aftermath that resulted in the regarrisoning of the fort and the restoration of the fur trade. At the heart of this discussion is an analysis of French-Canadian and Indian communities at the Straits of Mackinac and throughout the pays d’en haut. An accessible guide to this important period in Michigan, American, and Canadian history, Beyond Pontiac’s Shadow sheds invaluable light on a political and cultural crisis.

“Beyond Pontiac’s Shadow tells a compelling and dramatic story of a world in the midst of great change. Widder excels at tracing connections over time and space, and his account of the fall of Michilimackinac is true to both the place and its peoples, but most impressively he captures the wider world in which Michilimackinac was embedded. He conveys both the strangeness and the larger humanity of a thoroughly mixed world.”
—Richard White, Margaret Byrne Professor of American History, Stanford University

“Keith Widder has breathed fresh life into one of the best-known tales of Michigan history—the surprise capture of Fort Michilimackinac by Ojibwa using the ruse of an innocent game of lacrosse. Far more than just a retelling of the events of that June day in 1763, Beyond Pontiac’s Shadow places the incident in the context of the complex and shifting relationships between Native American groups, Canadian residents, and the British soldiers and traders who had taken control of the post less than two years earlier. Well written and solidly based on exhaustive research, Widder’s book explains for the first time why the 1763 uprising occurred, how it might have been prevented, and how the British learned from it. An essential text for the study of 'Pontiac’s War' as it played out on the Great Lakes.”
—Brian Leigh Dunnigan, Associate Director, William L. Clements Library, University of Michigan

“Beyond Pontiac’s Shadow is a much needed and long overdue assessment of Michilimackinac and its role in one of the first and most well-known pan-Indian wars against Europeans. Widder’s extensive and intimate knowledge of both the place and the records allows him to tell a multi-vocal story of colliding interests, inter-Indian conflict, and divided loyalties. With this fine achievement, we should never again take for granted the role played by Michilimackinac and its peoples in the larger history of North America.”
—Michael A. McDonnell, University of Sydney

“In Beyond Pontiac’s Shadow, Widder powerfully reveals that Michilimackinac’s significance extended far beyond a deadly game of baggatiway in 1763. With masterful research and writing, Widder vividly recaptures the continuities of everyday life among the Canadian, Odawa, and Ojibwe community of Michilimackinac, and demonstrates the enormous challenges that Great Britain faced as it asserted control over le pays d’en haut in the 1760s. One cannot understand the crucial interplay of empires and outposts such as Michilimackinac in the era of Pontiac’s War without reference to this work.”
—David L. Preston, The Citadel, author of The Texture of Contact

American Association for State and Local History Award of Merit
2013