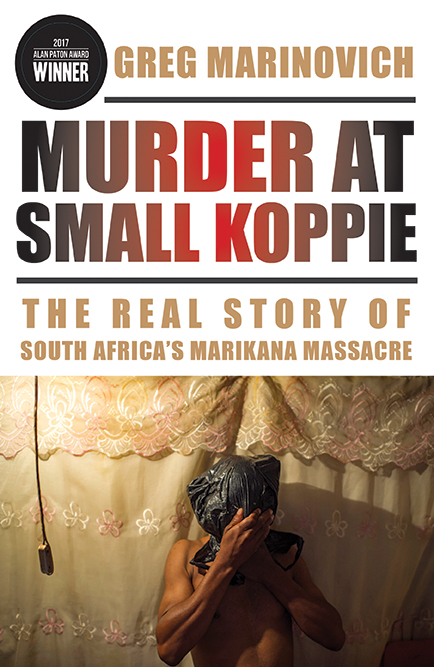 An award-winning investigation that has been called the most important piece of journalism in post-apartheid South Africa, Murder at Small Koppie delves into the truth behind the massacre that killed thirty-four platinum miners and wounded seventy-eight more in August of 2012 at the Marikana platinum mine in South Africa’s North West province. News footage of the event caused global outrage; however, it captured only a dozen or so of the dead. Here, Pulitzer Prize–winner Greg Marinovich focuses on the violence that took place at Small Koppie, a collection of boulders where a second massacre took place off-camera and in cold blood. Combining his own meticulous research, eyewitness accounts, and the findings of the Marikana Commission of Inquiry, Marinovich has crafted a vivid account of the tragedy and the events leading up to it. By taking readers into the mines, the shacks where the miners live, and the boardroom, Marinovich puts names, faces, and stories to Marikana’s victims and perpetrators. He addresses the big questions that any nation must ask when justice and equality are subverted by conflicts around class, race, money, and power, as well as the subsequent denial and finger-pointing that characterized the response of the mine owner, police, and government. This is a story that is both stirring and accurate.
Subjects: Journalism | History | African Studies
Series: African History and Culture
Publication Date: November 1st, 2017
267 pages| 6 in x 9.25 in
Michigan State University Press
Bios
Greg Marinovich is a Pulitzer Prize–winning photojournalist, author, and filmmaker. He was a Nieman Fellow at Harvard University and teaches Visual Journalism at Boston University and Harvard University.

“This book wins because it does not merely tell the story of the ten days of bloodshed. It also paints a portrait of the real people who still endure unimaginable conditions underground so that a select few can maintain their lavish lifestyles.”
—S'thembile Cele, journalist, City Press

“It was only after the Maverick’s coverage that many journalists realized that the miners actually had a story to tell, independently of the unions or any other organized formation.”
—Jane Duncan, Professor of Journalism, University of Johannesburg

“Journalist, photographer and humanist, Greg Marinovich, played an early and important role in exposing the truth of how thirty-four miners were killed and seventy-nine others injured by the police on an empty stretch of veld outside Marikana in the late afternoon of 16 August 2012. In this compelling book he details how the violence of the police, the failure of the mining houses to provide decent working conditions, the government’s dereliction of its constitutional duties and trade union enmity conspired in a massacre that violated our constitution, the administration of justice, and the rule of law.”
—George Bizos, human rights activist

“The autopsy reports of bullet wound trajectories suggest nothing less than extrajudicial executions, sinister echoes of apartheid-era death squad activities. But no summary of what happened at Marikana can do justice to Marinovich’s narrative, nor to the miners, police and security guards who lost their lives while authorities created ‘plausible deniability’ for themselves.”
—Anthony Egan, Daily Maverick

City of Broken Dreams
Myth-Making, Nationalism and the University in an African Motor City

To Swim with Crocodiles
Land, Violence, and Belonging in South Africa, 1800-1996