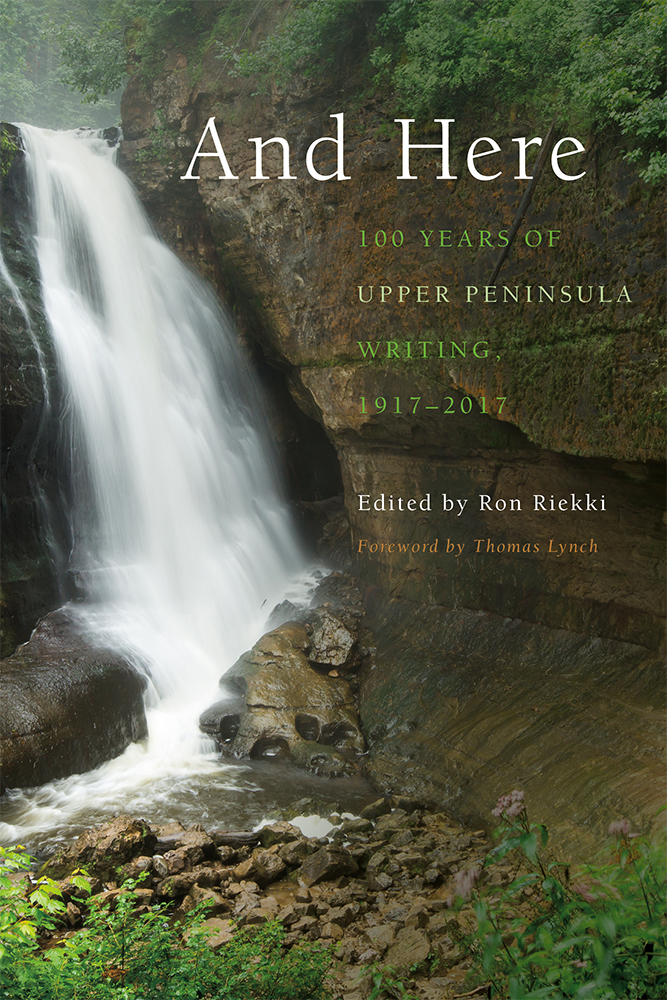 And Here
100 Years of Upper Peninsula Writing, 1917–2017
Edited by Ronald Riekki
Upper Peninsula literature has traditionally been suppressed or minimized in Michigan anthologies and Michigan literature as a whole. Even the Upper Peninsula itself has been omitted from maps, creating a people and a place that have become in many ways “ungeographic.” These people and this place are strongly made up of traditionally marginalized groups such as the working class, the rural poor, and Native Americans, which adds even more insult to the exclusion and forced oppressive silence. And Here: 100 Years of Upper Peninsula Writing, 1917–2017, gives voice to Upper Peninsula writers, ensuring that they are included in Michigan’s rich literary history. Ambitiously, And Here includes great U.P. writing from every decade spanning from the 1910s to the 2010s, starting with Lew R. Sarett’s (a.k.a. Lone Caribou) “The Blue Duck: A Chippewa Medicine Dance” and ending with Margaret Noodin’s “Babejianjisemigad” and Sally Brunk’s “KBIC.” Taken as a whole, the anthology forcefully insists on the geographic and literary inclusion of the U.P.—on both the map and the page.
Subjects: Fiction | Literature | Regional Studies
Publication Date: August 1st, 2017
364 pages| 6 in x 9 in
Michigan State University Press
Bios
Ron Riekki is an award-winning poet, novelist, and playwright. He edited The Way North, Here, and And Here.

“The Upper Peninsula of Michigan runs through the veins of those of us born there and calls a siren song to those who are compelled to visit. And Here: 100 Years of Upper Peninsula Writing, 1917–2017 beautifully conveys this unorthodox country through the best words and best writers of the past and present. It’s the quintessential reader for anyone called to this area either by blood or soul. Or both.”
—Alison DeCamp, author of My Near-Death Adventures (99% True) and My Near-Death Adventures: I Almost Died. Again

“If you love the U.P., you need this anthology. Here handy between two covers is a dose of whichever bit of it you want most at any given moment: eclectic, surprising, vivid, harsh, warm, wild. You’ll find familiar voices and new ones, each unique and all sharing this vital U.P. thing: authenticity.”
—Ellen Airgood, author of 2012 Michigan Notable Book South of Superior