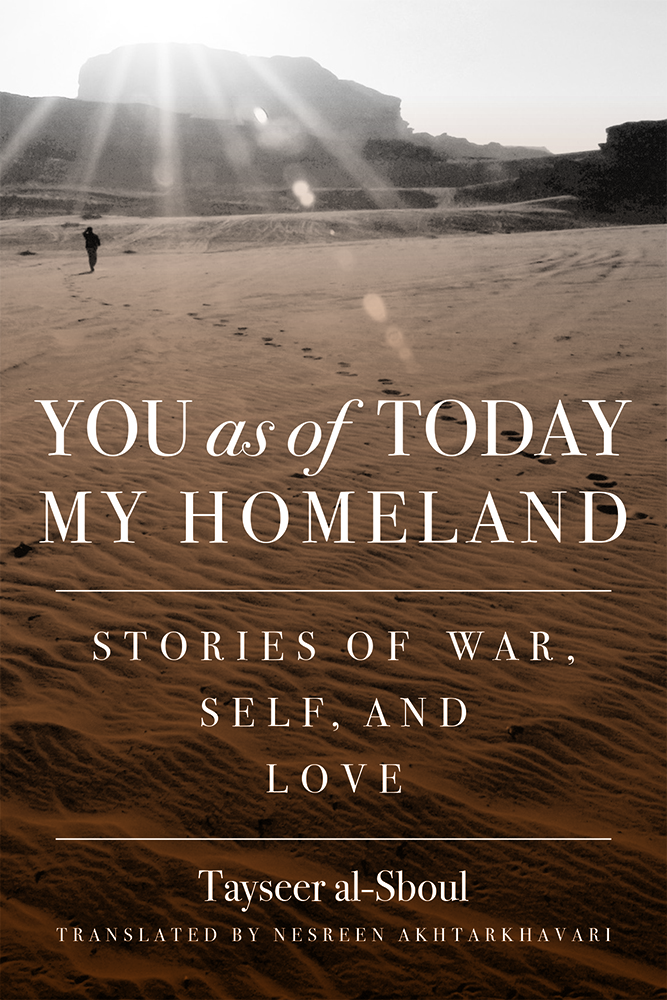 You as of Today My Homeland
Stories of War, Self, and Love
Tayseer Al-Sboul

This volume comprises a translation of the first post-modernist historical Arabic novella, You as of Today, by the renowned Jordanian writer Tayseer al-Sboul, and his two short stories “Red Indian” and “The Rooster’s Cry.” “Red Indian” and “The Rooster’s Cry” complement You as of Today by providing, with striking transparency and precision, narratives that examine man’s journey to self-discovery through events that are culturally unique, transparent, and at times shocking. This volume is rich with tales of war, love, politics, censorship, and the search for self in a complex and conflicting Arab world at a critical time in its history. In a captivating style consistent with the nature of events narrated in the text, al-Sboul unveils the inner nature of social, political, and religious patterns of life in Arab society with an honesty and skill that renders You as of Today My Homeland a testimony of human experiences that transcend the boundaries of time and place.
Subjects: Fiction | Middle Eastern Studies | Literary Studies
Series: Arabic Language and Literature Series
Publication Date: July 1st, 2016
120 pages| 6 in x 9 in
Michigan State University Press
Bios
Tayseer Al-Sboul (1939–1973) is one of Jordan's most celebrated writers and poets. His masterpiece You as of Today won the Al-Nahar Award for best Arabic novel in 1968 and continues to stand as one of the most accurate and powerful historical novels of its time.


Nesreen Akhtarkhavari is Associate Professor of Arabic Language and Culture and the director of Arabic Studies at DePaul University, where she teaches Arabic literature, film, culture, media, and translation. She cotranslated Desert Sorrows, recognized by World Literature Today as one of the seventy-five top translations for 2015, and the first-ever English translation of Rumi's Arabic poems, Love Is My Savior: The Arabic Poems of Rumi.

"In his novel and two short stories, Tayseer al-Sboul reflects the common human reality of generations of people devastated by war, oppression, and defeat capable of breaking the human spirit, but still able to live, love, and dream. In brutal honesty, al-Sboul bares his soul and provides us with authentic narrative loaded with social, cultural, and political experiences, rich with emotions, Arab in focus, and human in dimension. Through this translation, the novel and stories prove that a well-documented and skillfully narrated work transcends the boundaries of language and place, and helps us discover our shared humanity."
—Samiha Khreis, winner of the 2008 Arab Thought Foundation Literature Creativity Award

"I believe that language was created to communicate, and that each language evolved to express the thoughts and emotions of the particular people that speak that language. Tayseer al-Sboul mastered the Arabic language to produce literary work that is intense, rich, creative, and uniquely Arabic, which I did not believe could be translated to another language, but Dr. Akhtarkhavari managed to translate it. She understood the human experience expressed in Tayseer’s work, captured the essence of his thoughts and emotions, and skillfully presents them to the readers through a different medium, the English language."
—Toujan al-Faisal, writer, journalist, and Jordan’s first elected female parliamentarian

"Tayseer al-Sboul’s novel, You As Of Today, is a prominent, modernist literary work in Jordan and the Arab world. In it, al-Sboul utilizes a new approach to writing novels, and an innovative way of telling stories. His rich content, pioneering technique, distinctive structure, and unique framework make him one of the leading and celebrated figures in Arabic modernist literature. This award-winning novel and short stories will enrich the experience of readers everywhere."
—Sameer Qatami, professor of Arabic Literature, University of Jordan

Bread and Tea
The Story of a Man from Karak