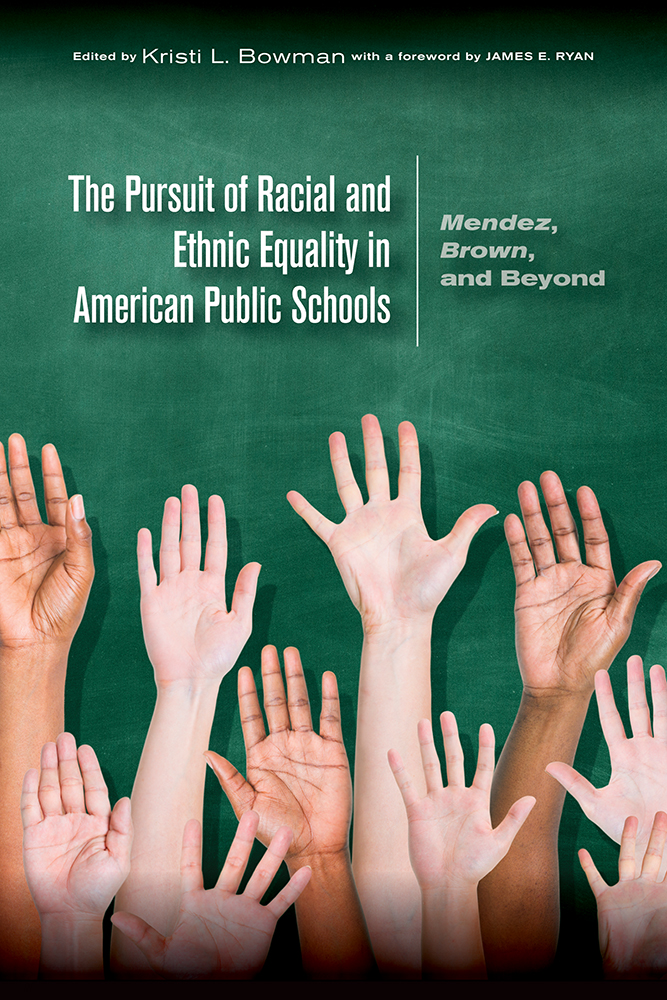 The Pursuit of Racial and Ethnic Equality in American Public Schools
Mendez, Brown, and Beyond
Edited by Kristi L. Bowman
In 1954 the Supreme Court decided Brown v. Board of Education; ten years later, Congress enacted the Civil Rights Act. These monumental changes in American law dramatically expanded educational opportunities for racial and ethnic minority children across the country. They also changed the experiences of white children, who have learned in increasingly diverse classrooms. The authors of this commemorative volume include leading scholars in law, education, and public policy, as well as important historical figures. Taken together, the chapters trace the narrative arc of school desegregation in the United States, beginning in California in the 1940s, continuing through Brown v. Board, the Civil Rights Act, and three important Supreme Court decisions about school desegregation and voluntary integration in 1974, 1995, and 2007. The authors also assess the status of racial and ethnic equality in education today and consider the viability of future legal and policy reform in pursuit of the goals of Brown v. Board. This remarkable collection of voices in conversation with one another lays the groundwork for future discussions about the relationship between law and educational equality, and ultimately for the creation of new public policy. A valuable reference for scholars and students alike, this dynamic text is an important contribution to the literature by an outstanding group of authors.
Subjects: Social Science | Law | Education
Publication Date: December 19th, 2014
478 pages| 6 in x 9 in
Michigan State University Press
Bios
Early Praise

"In this important new collection, twenty-six authors reflect on the racial and ethnic discrimination that infects our public schools, some sharing their own powerful stories. Their moving first-person narratives are interwoven with commentary by some of the nation’s most prominent scholars. It is a must-read for anyone who genuinely cares about the racial and ethnic disparities that continue to plague our public schools."
—Morris Dees, Founder and Chief Trial Attorney, Southern Poverty Law Center

"The Pursuit of Racial and Ethnic Equality in American Public Schools reminds us that to address the racial and ethnic inequality that exists in schools today, we must understand the social and legal foundation on which we stand. The book’s contributors trace that complex history, which includes African-American and Latino plaintiffs, and which involves not just courts, but also the US Departments of Education and Justice. They then look to the future, evaluating creative litigation and policymaking possibilities.  Lawyers, educators, and policymakers all have much to learn from this remarkable book."
—Charles P. Rose, former General Counsel, U.S. Department of Education

PODCAST and text interview: Michigan Radio with Kristi Bowman [3.24. "Michigna has to Solve its education crisis"]