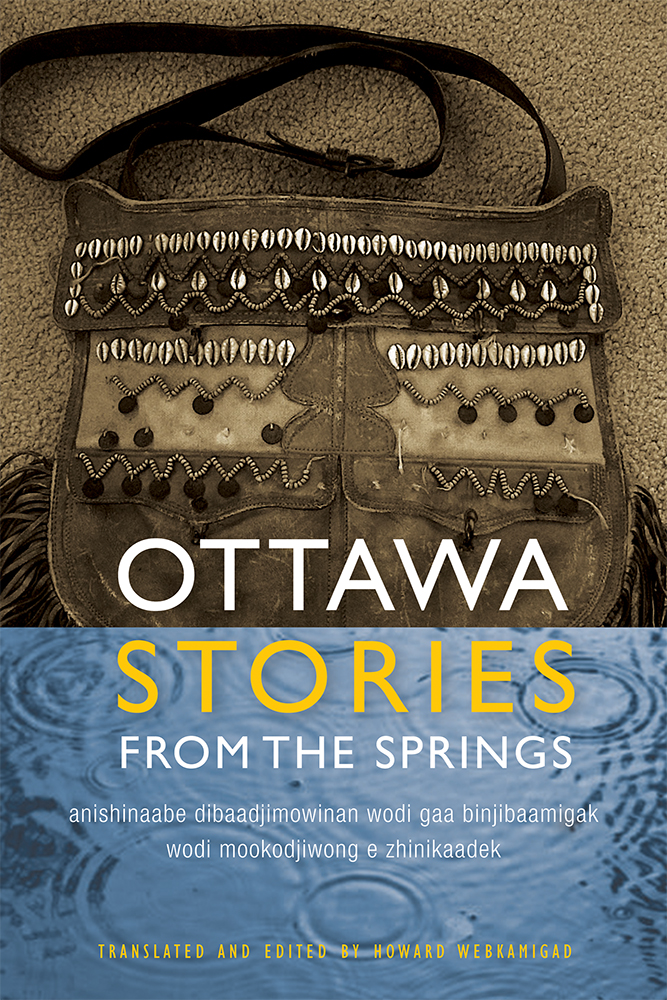 Ottawa Stories from the Springs
Anishinaabe dibaadjimowinan wodi gaa binjibaamigak wodi mookodjiwong e zhinikaadek
Edited by Howard Webkamigad
Sometimes things come to people out of the blue and seemingly for a reason. The Anishinaabe word for this is nigika. The stories contained in this collection reached Howard Webkamigad nearly eighty years after they were recorded, after first being kept in their original copper wire format by the American Philosophical Society and later being converted onto cassettes and held by Dr. James McClurken of Michigan State University. These rich tales, recorded by Anishinaabe people in the Harbor Springs area of Michigan, draw on the legends, fables, trickster stories, parables, and humor of Anishinaabe culture. Reaching back to the distant past but also delving into more recent events, this book contains a broad swath of the history of the Ojibwe/Chippewa, Ottawa, Pottawatomi, Algonkian, Abenaki, Saulteau, Mashkiigowok/Cree, and other groups that make up the broad range of the Anishinaabe-speaking peoples. Provided here are original stories transcribed from Anishinaabe-language recordings alongside Howard Webkamigad’s English translations. These stories not only provide a textured portrait of a complex people but also will help Anishinaabe-language learners see patterns in the language and get a sense of how it flows. Featuring side-by-side Anishinaabe/English translations.
Subjects: Native American Studies | Fiction | Language and Linguistics
Series: American Indian Studies
Publication Date: May 1st, 2015
250 pages| 6 in x 9 in
Michigan State University Press
Bios
Reviews
Awards