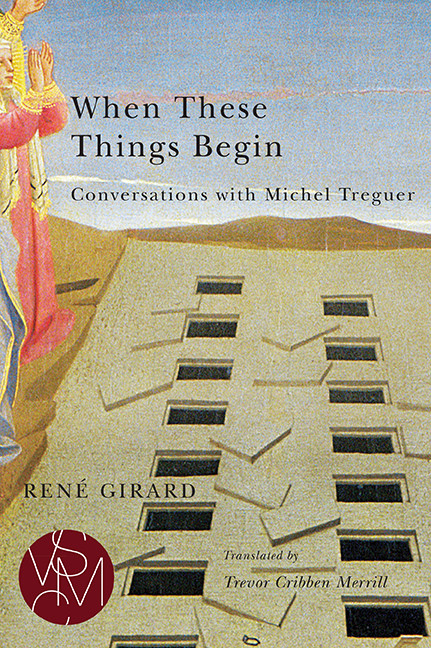 When These Things Begin
Conversations with Michel Treguer
René Girard

In this lively series of conversations with writer Michel Treguer, René Girard revisits the major concepts of mimetic theory and explores science, democracy, and the nature of God and freedom. Girard affirms that “our unprecedented present is incomprehensible without Christianity.” Globalization has unified the world, yet civil war and terrorism persist despite free trade and economic growth. Because of mimetic desire and the rivalry it generates, asserts Girard, “whether we’re talking about marriage, friendship, professional relationships, issues with neighbors or matters of national unity, human relations are always under threat.” Literary masters including Marivaux, Dostoevsky, and Joyce understood this, as did archaic religion, which warded off violence with blood sacrifice. Christianity brought a new understanding of sacrifice, giving rise not only to modern rationality and science but also to a fragile system that is, in Girard’s words, “always teetering between a new golden age and a destructive apocalypse.” Treguer, a skeptic of mimetic theory, wonders: “Is what he’s telling me true...or is it just a nice story, a way of looking at things?” In response, Girard makes a compelling case for his theory.
Subjects: Philosophy | Religion
Series: Studies in Violence, Mimesis, & Culture
Publication Date: January 1st, 2014
152 pages| 6 in x 9 in
Michigan State University Press
Bios
René Girard is a member of the French Academy and Emeritus Professor at Stanford University. His books have been translated and acclaimed worldwide. He received the Modern Language Association’s Award for Lifetime Scholarly Achievement in 2008.

The One by Whom Scandal Comes