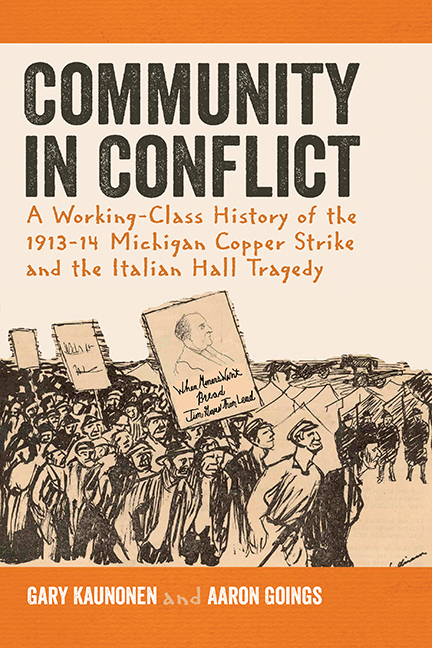 Community in Conflict
A Working-class History of the 1913-14 Michigan Copper Strike and the Italian Hall Tragedy
Gary Kaunonen, and Aaron Goings

A mirror of great changes that were occurring on the national labor rights scene, the 1913–14 Michigan Copper Strike was a time of unprecedented social upheaval in Michigan’s Upper Peninsula. With organized labor taking an aggressive stance against the excesses of unfettered capitalism, the stage was set for a major struggle between labor and management. The Michigan Copper Strike received national attention and garnered the support of luminaries in organized labor like Mother Jones, John Mitchell, Clarence Darrow, and Charles Moyer. The hope of victory was overshadowed, however, by violent incidents like the shooting of striking workers and their family members, and the bitterness of a community divided. No other event came to symbolize or memorialize the strike more than the Italian Hall tragedy, in which dozens of workers and working-class children died. In Community in Conflict, the efforts of working people to gain a voice on the job and in their community through their unions, and the efforts of employers to crush those unions, take center stage. Previously untapped historical sources such as labor spy reports, union newspapers, coded messages, and artifacts shine new light on this epic, and ultimately tragic, period in American labor history.

Subjects: History | Labor History
Publication Date: July 1st, 2013
358 pages| 6 in x 9 in
Michigan State University Press
Bios
Gary Kaunonen is currently in Michigan Technological University's Ph.D. program in Rhetoric and Technical Communication. Both of his grandfathers worked in the mines of the Mesabi Iron Range in northeastern Minnesota, and, before becoming an academic, Kaunonen, himself, charged blast furnaces and operated a bull-ladle in an iron foundry.

“In Community in Conflict, Kaunonen and Goings have truly created a working-class history of the 1913–14 Michigan Copper Strike, presenting valuable new information and perspectives that enrich our understanding of the strike from the bottom up. They have served up an essential antidote to the majority of earlier histories, which treated the strike as a temporary aberration in an otherwise idyllic mining region and the strikers and their larger working-class community as faceless, one-dimensional economic actors.”
—John P. Beck, Associate Professor, Labor Education Program, Michigan State University, and Co-Director, Our Daily Work/Our Daily Lives

“Community in Conflict emphasizes that the Michigan copper district strike of 1913–14 was not just a local battle between capital and labor. The authors challenge the view that the Copper Country was largely a happy hamlet presided over by benevolent mine bosses prior to 1913. From their perspective, well before the great strike of 1913–14, the region was wrought with social, political, and economic divisions based on race, ethnicity, gender, and, especially, class.”
—Larry D. Lankton, Professor Emeritus, Michigan Technological University

“Community in Conflict locates the 1913–14 Michigan Copper Strike in the longer history of working-class community and organizing. Using new sources like labor spies’ reports and the local labor press, the authors present detailed and often conflicting evidence that exposes the complexity of class in Copper Country and addresses the unanswered questions about what exactly happened as the bitterly contested strike climaxed with the Italian Hall tragedy.”
—Elizabeth Jameson, Professor, Department of History, University of Calgary

“Kaunonen and Goings add a working-class perspective to our understanding of the 1913 Michigan copper strike. Drawing from newspapers, manuscript sources, and even labor songs of the period, the book casts the local strike against national social and labor contexts, providing a view of the conflict from the workforce. A welcome addition to the surprisingly limited scholarship on this important topic.”
—Erik Nordberg, University Archivist, Michigan Technological University