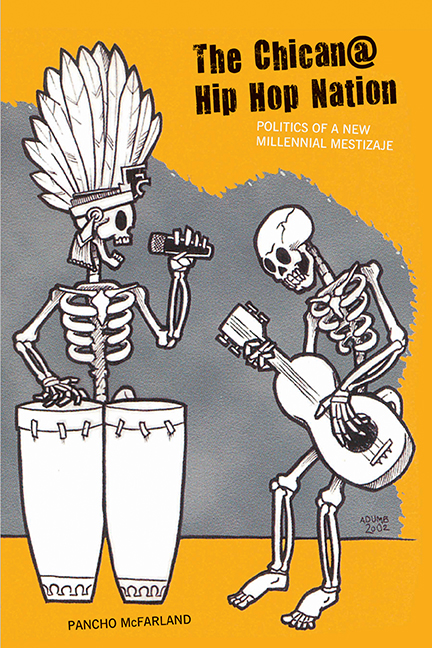 The population of Mexican-origin peoples in the United States is a diverse one, as reflected by age, class, gender, sexuality, and religion. Far from antiquated concepts of mestizaje, recent scholarship has shown that Mexican@/Chican@ culture is a mixture of indigenous, African, and Spanish and other European peoples and cultures. No one reflects this rich blend of cultures better than Chican@ rappers, whose lyrics and iconography can help to deepen our understanding of what it means to be Chican@ or Mexican@ today. While some identify as Mexican mestizos, others identify as indigenous people or base their identities on their class and racial/ethnic makeup. No less significant is the intimate level of contact between Chican@s and black Americans. Via a firm theoretical foundation, Pancho McFarland explores the language and ethos of Chican@/Mexican@ hip hop and sheds new light on three distinct identities reflected in the music: indigenous/Mexica, Mexican nationalist/immigrant, and street hopper. With particular attention to the intersection of black and Chicano cultures, the author places exciting recent developments in music forms within the context of progressive social change, social justice, identity, and a new transnational, polycultural America.
Subjects: Music | Latino Studies
Series: Latinos in the United States
Publication Date: November 1st, 2013
310 pages| 6 in x 9 in
Michigan State University Press
Bios
Early Praise

“The Chican@ Hip Hop Nation is a tour de force! With his own rhythm and flow, brilliant linguistic analysis of music and lyrics, and deep knowledge of Chicano hip-hop, Pancho McFarland shows how Chicano rappers simultaneously destabilize parochial articulations of Chicano identity and articulate a contradictory, multiracial, and hypermasculine mestizaje for the new millennium. McFarland challenges conventional narratives of hip hop’s ethnic and racial contours to reveal a cultural world and industry in which gender, sexuality, and race are always interconnected and the relationship between resistance, power, and global capital is always in the balance.”
—Luis Alvarez, author of The Power of the Zoot: Youth Culture and Resistance during World War II, Associate Professor of History, University of California at San Diego

“McFarland has delivered to us a powerfully unifying exploration into underdiscussed aspects of the histories of Chicano and African diaspora people through a radical hip-hop lens. Reading The Chican@ Hip Hop Nation is itself an act of learning and engaging that anti-imperial struggle, a small but strong step forward. McFarland has certainly lived up to the brightest of academic traditions that teach and radically inspire. If, as Fanon has said, the goal of the settler is ‘to make even dreams of liberty impossible’ for the colonized, McFarland has indeed struck back by providing us yet another needed source for those ‘freedom dreams.’”
—Jared Ball, author of I Mix What I Like! A Mixtape Manifesto

interview with Pancho McFarland,
By Gabriel San Roman on OC Weekly Blogs,  "Lessons We Learned from the Chican@Hip-Hop Nation"

Interview with Pancho McFarland,
on iMIXwhatilike!