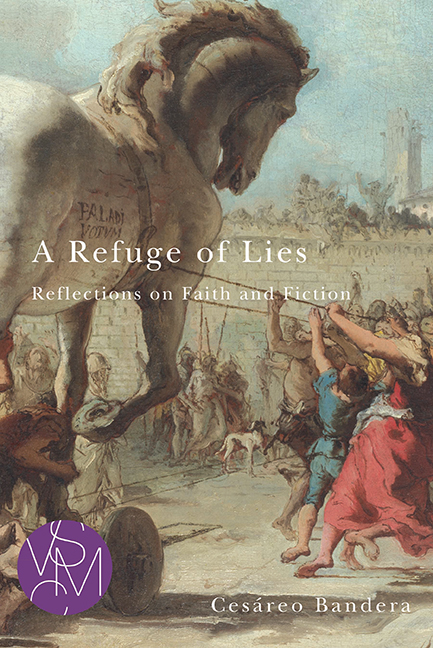 A Refuge of Lies
Reflections on Faith and Fiction
Cesáreo Bandera

Erich Auerbach’s seminal Mimesis: The Representation of Reality in Western Literature was published more than sixty years ago and is deservedly considered a classic. The book brought into focus the fundamental difference that exists between the two basic approaches to the textual representation of reality in Western culture. These two “styles,” as Auerbach called them, were archetypically displayed in Homer’s poems and in the Old Testament, respectively. Auerbach’s differentiation is the starting point for Bandera’s insightful work, which expands and develops on this theory in several key ways. One of the more significant differences between the two styles transcends and grounds all the others. It concerns the truth of each of the two archetypal texts, or rather, the attitude exhibited in those texts with regard to the truth of what they narrate. Auerbach, Bandera notes, is amazed at the Bible’s “passionate” concern for the truth of what it says—a concern he found absent in Homer. Bandera finds that what the prophet Isaiah called “a refuge of lies” defines Homer’s work. He draws on his own research and René Girard’s theory of the sacred to develop an enhanced perspective of the relationship between these texts.

“Cesáreo Bandera’s writing is the best justification I know for the value of both a classical and a liberal education.  In A Refuge of Lies, he opens up for us, with dexterity and subtlety, the astonishing feat which it is for humans to be able to face, and to tell, the truth; and he does so by showing how we ride, often unaware, upon the unraveled inner logic of the archaic sacred.  A rich and fascinating guide to help us navigate our times.”
—James Alison, priest and theologian

“Cesáreo Bandera is one of René Girard’s oldest friends and earliest collaborators.  No one is better qualified than he to enrich and extend Girard’s original contribution. He has done so with characteristic erudition and profound insight. This inspiring book is sure to be a joy for those more familiar with Girard’s work and a revelation to those discovering [him] for the first time.”
—Gil Bailie, author of Violence Unveiled

“Cesáreo Bandera’s clear and insightful study starts with Erich Auerbach’s distinction between Homeric poems and the Old Testament, leading to a profound understanding of the biblical legacy and its uncovering of sacred violence. Bandera’s book is at the same time an application of René Girard’s mimetic anthropology and a critical discussion of it.”
—Wolfgang Palaver, University of Innsbruck

“Bandera demonstrates the simplicity and power of Girard’s mimetic theory as he draws upon it to uncover the reciprocal desire and violence contained in the pagan sacred and modern secular attempts to recover it. Offering also a brilliant, appreciative critique of the mimetic theory, he shows that its fundamental principle, which is that mimetic desire is the potential fomentation of violence, must admit an exception, namely that the love of God is desirable in itself apart from human mimesis.”
—James G. Williams, author of The Violence, Bible and the Sacred and Girardians: The Colloquium on Violence and Religion, 1990-2010