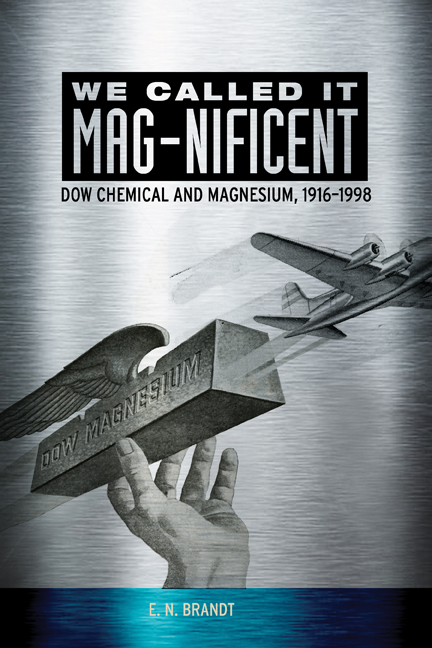 During World War I, in 1916, Herbert Dow, founder of The Dow Chemical Company, received news of “star shells,” weapons that glowed eerily as they descended over the trenches of the enemy, making them easier to attack. The critical component in these flares was magnesium, a metal that was suddenly in great demand. Dow, along with a half-dozen other U.S. firms, swiftly began manufacturing magnesium, but by 1927 Dow was the only U.S. company still in the business. Dow’s key innovation was a method of extracting the metal from seawater, an engineering accomplishment finally achieved at Freeport, Texas, only eleven months prior to the Pearl Harbor attack. Dow was the principal supplier of magnesium for U.S. and British planes during World War II, a distinction that ironically yielded an indictment from the U.S. government on monopoly charges. The company eventually became the world’s largest manufacturer of magnesium until 1990, when the Chinese entered the market and offered the metal at rock-bottom prices. Dow quietly ended its production of magnesium in 1998. Brandt’s history is an engaging look at Dow’s eighty-three-year romance with this remarkable metal.
Subjects: History | Science Studies
Publication Date: May 1st, 2013
150 pages| 6 in x 9 in
Michigan State University Press
Bios
E. N. Brandt has been the company historian of Dow Chemical since 1983. A journalism graduate of Michigan State University, he served as a U.S. Army officer in World War II, as a United Press correspondent, and as a U.S. State Department employee in Europe before joining Dow’s public relations department in 1953.

Chairman of the Board
A Biography of Carl A. Gerstacker