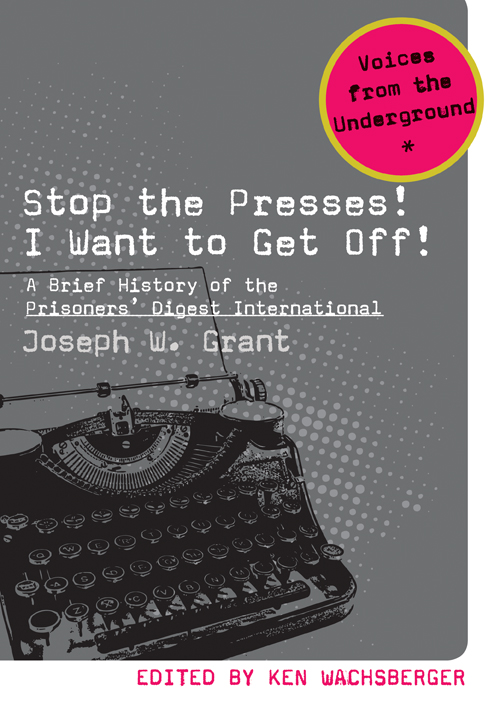 Stop the Presses! I Want to Get Off!
A Brief History of the Prisoners’ Digest International
Joseph W. Grant
Edited by Ken Wachsberger

The final book in the groundbreaking Voices from the Underground series, Stop the Presses! I Want to Get Off!, is the inspiring, frenetic, funny, sad, always-cash-starved story of Joe Grant, founder and publisher of Prisoners’ Digest International, the most important prisoners’ rights underground newspaper of the Vietnam era. From Grant’s military days in pre-Revolutionary Cuba during the Korean War, to his time as publisher of a pro-union newspaper in Cedar Rapids and his eventual imprisonment in Leavenworth, Kansas, Grant’s personal history is a testament to the power of courage under duress. One of the more notorious federal penitentiaries in the nation, Leavenworth inspired Grant to found PDI in an effort to bring hope to prisoners and their families nationwide.

“It would be sheer understatement for me to praise Joe Grant’s prison bio as ‘groundbreaking,’ ‘moving,’ or ‘eye-opening.’ It is all these things, but certainly much more…. This is journalism, of a kind that never made it into the curriculum of J-School. This ain’t your grandmama’s New York Times. This is the real stuff. Grant gives us all a bird’s-eye view of how prisons ran during the ‘60s and ‘70s, and gives us a glimpse of what might have been, before the prison reform movement fell into the black hole of the corrections industry, and the culture of mass fear emerged.”
—Mumia Abu-Jamal, award-winning journalist and former Black Panther Party member, written while living on death row in Pennsylvania prison

“Starting in the late 1960s prisoners and ex-prisoners began to publish their own magazines and have their own voice, unmuzzled by the state, where they could talk about their dreams, their aspirations, and the brutal cesspools of criminality known as the American gulag. Prisoners’ Digest International was … one of the first independent prison publications to give voice to current and former prisoners. Unlike the government-run prison publications, PDI and the free prison press were not the warden’s press office and could, and did, tell it like it was…. PDI did not have a long life in terms of longevity or issues published. But it had a profound impact.”
—Paul Wright, editor and co-founder of Prison Legal News

“Joe Grant’s Stop the Presses! is yet another glimpse into the dynamic life of a man who knew Peggy Lee, was a prize fighter in the Navy, smuggled pianos into Cuba, did time in Leavenworth for counterfeiting, ran a literary establishment called Book Zen, hosted a literary/political talk show in Madison, and at the age of 81 still goes at life with great gusto and actively opposes injustice wherever it raises its ugly head. He’s a Viking in spirit, and I count him among my very best friends.”
—John Bennett, poet, window washer, and author, most recently of Tire Grabbers

“As a three-tour Vietnam combat veteran I find Joe Grant’s hands-on approach to fighting injustice inspiring. When something is wrong most of us furrow our brows and complain while Joe is rolling up his sleeves. I am proud to know Joe Grant; his bravery and tenacity are inspiring.”
—Sarge Lintecum, highly decorated Vietnam combat veteran of the 101st Airborne Division, blues man, recording artist, and harmonica master

“The story of one man’s life-long willingness to put his own freedom on the line to confront wrongs in the penal system and other injustices, Joe Grant’s odyssey reflects a journey toward personal integrity and growth at great personal cost.”
—Paul Kelso, field interviewer for the Iowa AFL-CIO’s oral history project 1977–79, folksinger, newsman, teacher

My Odyssey Through the Underground Press