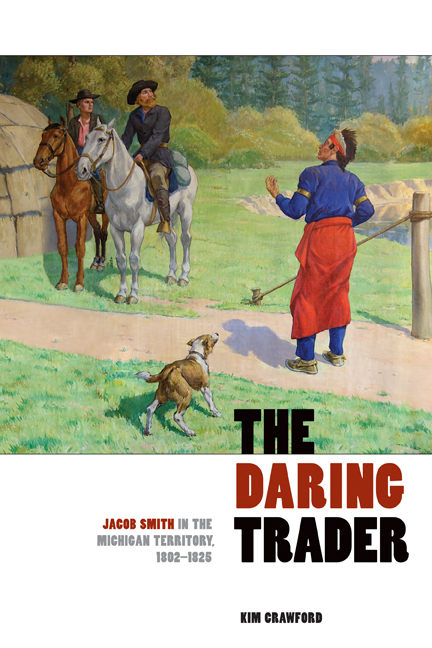 A fur trader in the Michigan Territory and confidant of both the U.S. government and local Indian tribes, Jacob Smith could have stepped out of a James Fenimore Cooper novel. Controversial, mysterious, and bold during his lifetime, in death Smith has not, until now, received the attention he deserves as a pivotal figure in Michigan’s American period and the War of 1812. This is the exciting and unlikely story of a man at the frontier’s edge, whose missions during both war and peace laid the groundwork for Michigan to accommodate settlers and farmers moving west. The book investigates Smith’s many pursuits, including his role as an advisor to the Indians, from whom the federal government would gradually gain millions of acres of land, due in large part to Smith’s work as an agent of influence. Crawford paints a colorful portrait of a complicated man during a dynamic period of change in Michigan’s history.

Subjects: Native American Studies | History | American Studies
Publication Date: March 1st, 2012
320 pages| 6 in x 9 in
Michigan State University Press
Bios
Kim Crawford is a retired newspaper reporter and author of The Daring Trader: Jacob Smith in the Michigan Territory and coauthor of The 4th Michigan Infantry in the Civil War. He has written about Michigan Civil War soldiers for Michigan History magazine, served as guest curator for the Flint Sloan Museum's 2012 Civil War exhibit, The Brave and the Faithful, and has given talks on both the 4th and 16th Michigan Infantry regiments to historical societies and Civil War roundtables.

The 16th Michigan Infantry in the Civil War, Revised and Updated

The 4th Michigan Infantry in the Civil War