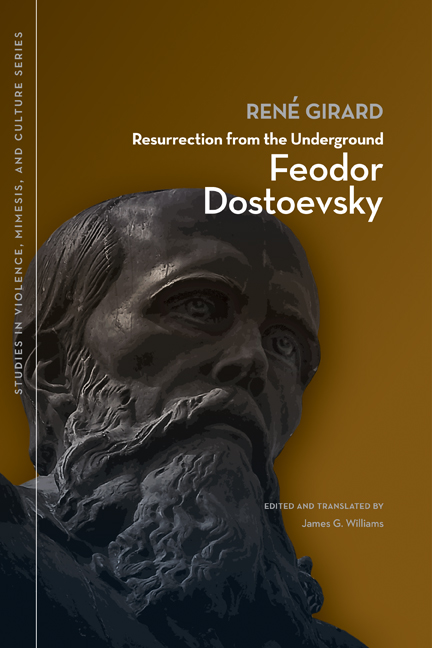 In a fascinating analysis of critical themes in Feodor Dostoevsky’s work, René Girard explores the implications of the Russian author’s “underground,” a site of isolation, alienation, and resentment. Brilliantly translated, this book is a testament to Girard’s remarkable engagement with Dostoevsky’s work, through which he discusses numerous aspects of the human condition, including desire, which Girard argues is “triangular” or “mimetic”—copied from models or mediators whose objects of desire become our own. Girard’s interdisciplinary approach allows him to shed new light on religion, spirituality, and redemption in Dostoevsky’s writing, culminating in a revelatory discussion of the author’s spiritual understanding and personal integration. Resurrection is an essential and thought-provoking companion to Dostoevsky’s Notes from the Underground.


James Williams is the author of The Bible, Violence, and the Sacred and editor of The Girard Reader.

“Translator Williams…states in his foreword that no writer better portrays envy, shame, and sadomasochistic relationships than Dostoevsky. Girard (emeritus, French, Stanford Univ.) interprets in three short chapters the universe, or ‘underground,’ that Dostoevsky created in his fiction. The novelist's ‘underground man,’ as Girard shows, is alienated, resentful of others, and obsessed with idolatry for his ‘all powerful role model.’ But the extreme negativism of Dostoevsky's ‘underground man’ (Girard uses The Brothers Karamazov as an example) could only inevitably lead to his later affirmation and acceptance of death, and hence, a spiritual resurrection. Girard's fascinating postface explains the influence of mimetic desire and the obstacle/model obsession in humans. This is a splendid translation and compelling reading for comparative literature specialists, especially those interested in the work of Dostoevsky. Recommended to all humanists and scholars.”
—Library Journal

“A literary critic explores ‘mimetic desire’ and the sacred in Dostoevsky's novels. Girard, an emeritus professor of French at Stanford University, first published this book in France in 1963 and revised it in 1976; it is this revision that is now being issued in an English translation. With one foot in anthropology and another in religious studies, Girard remains a literary critic out of step with the majority of his colleagues, who are mostly concerned with such secular matters as ideology. Girard unabashedly holds that literature has been able ‘to preserve some of the original power of the sacred’ that has otherwise been lost to our post-religious technological era. Dostoevsky is a key case in point. Editor and translator Williams…offers a helpful prologue that situates the book in Girard's body of work. The critic's central thesis is that desire is mimetic. Contrary to the conventional view that instinct dominates our desires, Girard argues that we instinctively copy desire: ‘To say that our desires are imitative or mimetic is to root them neither in their objects nor ourselves but in a third party, the model or mediator, whose desire we imitate in the hope of resembling him or her, in the hope that our two beings will be `fused', as some Dostoevskyan characters love to say.’ Girard is able to show exactly how this works in Dostoevsky's fiction over the entire course of the writer's career. Clear as this picture may be, Girard's highly specialized monograph is not for the casual Dostoevsky enthusiast. His readings of the later works, especially Demons and The Brothers Karamazov, take up explicitly religious interpretations of the ‘mimetic desire’ thesis. The book is marred by opaque generalizations and a few excessively compressed forays into intellectual history. Girard can be hard to follow. He can also be persuasive. Alternately infuriating and engrossing, this messy little book is worth reading for its scattering of imaginative, challenging, and fruitful insights.”
— Kirkus Reviews

The One by Whom Scandal Comes

When These Things Begin
Conversations with Michel Treguer