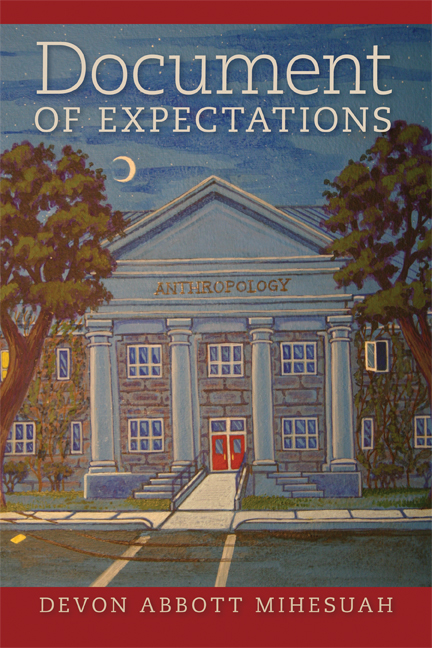 When Hopi/White Mountain Apache anthropologist Tony M. Smokerise is found murdered in his office at Central Highlands University, the task of solving the crime falls to jaded Choctaw detective Monique Blue Hawk and her partner Charles T. Clarke. A seemingly tolerant and amicable office of higher education, the university, Monique soon learns, harbors parties determined to destroy the careers of Tony and his best friend, the volatile Oglala anthropologist Roxanne Badger. In the course of her investigation, Monique discovers that the scholars who control Tony’s department are also overseeing the excavation of a centuries-old tribal burial site that was uncovered during the construction of a freeway. Tony’s role in the project, she realizes, might be the key to identifying his murderer. This virtuosic mystery novel explores, in engrossing detail, the complex motives for a killing within the sometimes furtive and hermetic setting of academia.

"In this carefully woven narrative, Mihesuah takes readers though an intricate maze of dysfunctional departmental politics and the lucrative world of stolen Indian artifacts. Along the way, she exposes a range of long-held stereotypical and colonial assumptions about indigenous people, and in particular about the aims and purposes of indigenous activist scholarship in American universities. This book is a compelling and highly entertaining mystery, but is also an important contribution to the literature of indigenous resistance."
—Michael D. Wilson, author of Writing Home: Indigenous Narratives of Resistance

"A novel of great drama and high crime. With obvious anger and subtle plotting Document of Expectations manages to keep the reader on the edge of their seat with anticipation…. One is reminded of Ishmael Reed?the drama, politics, and culture all mingle to create a wonderful effect."
—David Treuer, Leech Lake Ojibwe, author of The Translation of Dr. Apelles