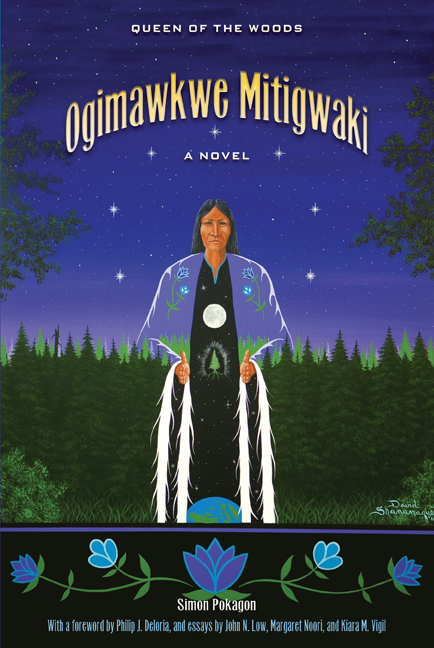 Simon Pokagon, the son of tribal patriarch Leopold Pokagon, was a talented writer, advocate for the Pokagon Potawatomi community, and tireless self-promoter.
In 1899, shorty after his death, Pokagon's novel Ogimawkwe Mitigwaki (Queen of the Woods)—only the second ever published by an American Indian—appeared. It was intended to be a testimonial to the traditions, stability, and continuity of the Potawatomi in a rapidly changing world. Read today, Queen of the Woods is evidence of the author's desire to mark the cultural, political, and social landscapes with a memorial to the past and a monument to a future that included the Pokagon Potawatomi as distinct and honored people.
This new edition offers a reprint of the original 1899 novel with the author's introduction to the language and culture of his people. In addition, new accompanying materials add context through a cultural biography, literary historical analysis, and linguistic considerations of the unusual text.

Subjects: Fiction | Native American Studies | Literary Criticism
Series: American Indian Studies
Publication Date: January 1st, 2011
215 pages| 6 in x 9 in
Michigan State University Press
Bios
MARGARET NOODIN received an MFA in Creative Writing and a PhD in English and Linguistics from the University of Minnesota. She is an Associate Professor at the University of Wisconsin–Milwaukee where she also serves as the Director of the Electa Quinney Institute and teaches Anishinaabemowin. She is also cocreator of www.ojibwe.net and has published a bilingual edition of poetry in Anishinaabemowin and English.

“More than a century after its initial publication, Queen of the Woods has finally received the attention it deserves. Masterfully analyzed and edited here, Simon Pokagon’s unique, bilingual, cross-cultural text can now be read and discussed by a broad audience of students and admirers. We can now appreciate both his unique moment in history and his remarkable achievement as never before. “
––Frederick E. Hoxie, Swanlund Professor, University of Illinois, Urbana/Champaign

“Simon Pokagon’s Queen of the Woods is a treasure of Indigenous intellectual and literary history, so kudos to the editors for giving it new life. As the insightful accompanying essays here make clear, Pokagon was a quirky figure whose work needs careful contextualization, but his work also comes across in these intriguing, imaginative, and insightful pages as a significant contribution to a heritage of writing with which we are only now becoming familiar.”
––Robert Allen Warrior, author of Tribal Secrets: Recovering American Indian Intellectual Traditions

Papers of the Forty-Ninth Algonquian Conference

Papers of the Forty-Eighth Algonquian Conference

Papers of the Forty-Seventh Algonquian Conference