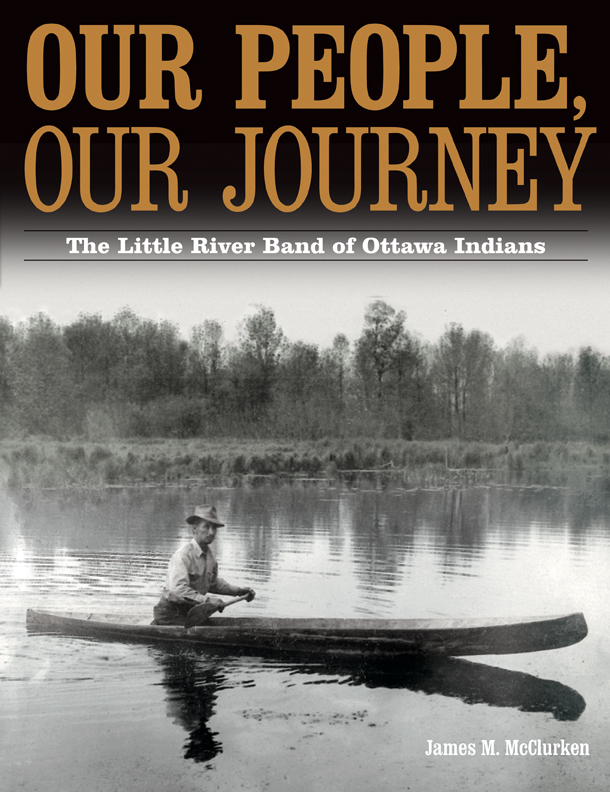 Our People, Our Journey is a landmark history of the Little River Band of Ottawa Indians, a Michigan tribe that has survived to the present day despite the expansionist and assimilationist policies that nearly robbed it of an identity in the late nineteenth century.
In his thoroughly researched chronicle, McClurken documents in words and images every major lineage and family of the Little River Ottawas. He describes the Band's struggles to find land to call its own over several centuries, including the hardships that began with European exploration of what is now the upper Midwest. Although the Little River Ottawas were successful at integrating their economic and cultural practices with those of Europeans, they were forced to cede land in the face of American settlements.
McClurken explains how the Little River Band was forced, in 1858, onto a reservation on the Pere Marquette and Manistee Rivers where they settled with a number of other Ottawa bands. However, the very treaty intended to provide the Grand River Ottawas with a permanent reservation "homeland" eventually allowed non-Indians to acquire title to nearly two-thirds of the land within the reservation by 1880.

Subjects: Regional Studies | Native American Studies
Publication Date: March 13th, 2009
394 pages| 8.5 in x 11 in
Michigan State University Press
Bios
James M. McClurken has studied North American tribes for more than three decades. He is the founder and president of McClurken and Associates, a consulting company that researches issues related to the indigenous peoples of North America. He is editor of Fish in the Lakes, Wild Rice, and Game in Abundance: Testimony on Behalf of Mille Lacs Ojibwe Hunting and Fishing Rights.

Fish in the Lakes, Wild Rice, and Game in Abundance
Testimony on Behalf of Mille Lacs Ojibwe Hunting and Fishing Rights