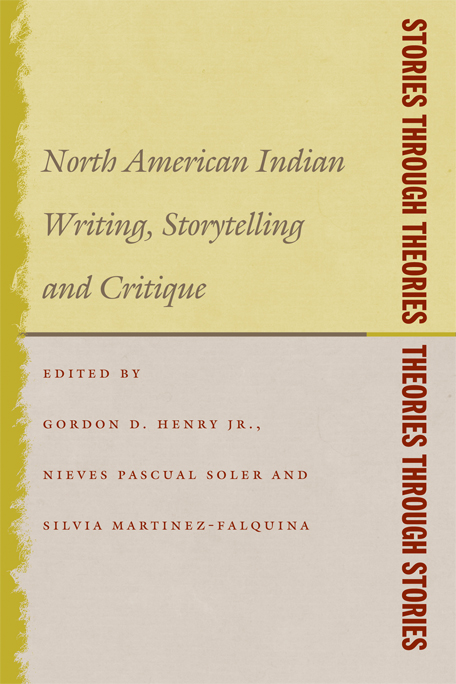 Stories Through Theories/Theories Through Stories explores the uneasy relations—often contentious, sometimes complicit—between American Indian Literature and literary theory. Some of the essays in this book open American Indian narratives to theoretical critique based on "western depth models." Others work from a very different direction, finding critique in storytelling and processes of narrative production, thereby exposing dimensions of literary theory that grow from the indigenous ground of Native stories themselves.
This collection of essays—sometimes playfully but always insistently—changes our readings of Native works and challenges our roles as intellectual guides until we step deeper into the ambiguous territories where writer, listener, reader, and critic intersect.
Taken together, these essays provide compelling evidence for looking at primary Native cultures, authors, and histories as enrichments of Native literature.


Nieves Pascual Soler is Senior Lecturer of North American Literature at the University of Ja\u00e9n, Spain.


Silvia Martinez-Falquina is Associate Professor of English at the Department of English and German Philology at the University of Zaragoza, Spain.

"Whether examining the convoluted origins of what Soler terms “an excess of indigeneity” in the posturing of masquerading Indians like Grey Owl or revisiting the theoretical storytelling of Native writes like Gerald Vizenor and Tom King, the scholar/writers in this volume have new maps of reading to pass fellow academics on the theory trails in Indigenous Studies.  McGlennen sets markers distinguishing between acts of  “liberation” and acts of “reclamation” in understanding feminist texts. Henry gestures toward trails of affiliation inherent in Native Life stories. Taken together, this collection of essays—
sometimes playfully, but always insistently—turns our readings of Native works, and challenges our roles as intellectual guides until we step deeper into the ambiguous territories where writer, listener, reader, and critic intersect."
---Kimberly Blaeser, Author of Apprenticed to Justice, Professor University of Wisconsin at Milwaukee

"This is an outstanding collection of articles and commentary on storytelling and Indian voice. Gordon Henry has done an exceptional job in marshalling writers and critics who understand the intricacies of exploring and understanding cultural encounters as a part of "Indian America." The book sheds real light on the subject and will be a standard for years to come."
---Dr. George L. Cornell, Director - Native American Institute, Michigan State University.