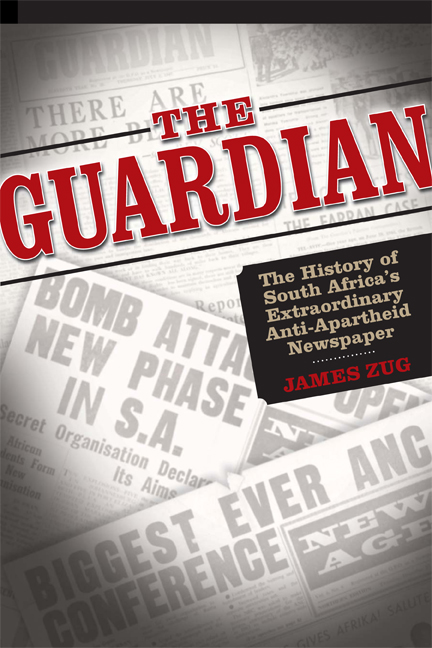 In this fascinating history of the Guardian, South Africa’s famous anti-apartheid newspaper, James Zug tells the story of a political publication that not only reported events but also helped to shape them. Between 1937 and 1963, the Guardian was the sole voice of dissent in the South African media, and Zug shows us how it played an essential rolein the struggle to end apartheid.
Combining a scholar’s attention to facts with a journalist's sense of the dramatic, Zug recreates a tumultuous and dangerous era. The newspaper's telephones were tapped, articles were censored, and staff members were jailed and deported. The apartheid regime banned the paper three times, charged it with high treason, and could only silence it completely, in 1963, by placing the entire staff under house arrest. As Zug explains, the Guardian persisted through the harassment and torment because the paper's staff knew the significance of their work: "We not only record the struggle for freedom, we are actively participating in it." When wages were kept low, when workers went on strikes, and when fascism reared its head in South Africa, the Guardian spoke up. At its height, the paper sold more than 50,000 copies a week nationally, with four bureaus across the country.
As Nelson Mandela, head of the African National Congress (ANC), led the movement to end apartheid, he issued messages through the paper. Perhaps the newspaper's most significant accomplishment, Zug writes, was uniting the ANC and the South African Communist Party. The Guardian translated Marxism into an African idiom for the ANC, bringing together the two factions that propelled the liberation struggle into a mass movement.
This highly readable work is more than a perceptive look at an influential paper. It is a testament to the power of the printed word in ending injustice and changing the course of history.

Subjects: History | African Studies
Publication Date: October 18th, 2007
371 pages| 6 in x 9 in
Michigan State University Press
Bios
James Zug is a historian and journalist with an MFA in nonfiction writing from Columbia University. He is the author of Squash: A History of the Gameand American Traveler: The Life and Adventures of John Ledyard, the Man Who Dreamed of Walking the World. As a journalist, he has written for the Atlantic Monthly and Tin House. His book reviews have appeared in the New York Times Book Review, the Philadelphia Inquirer, Outside magazine and the Chicago Tribune.