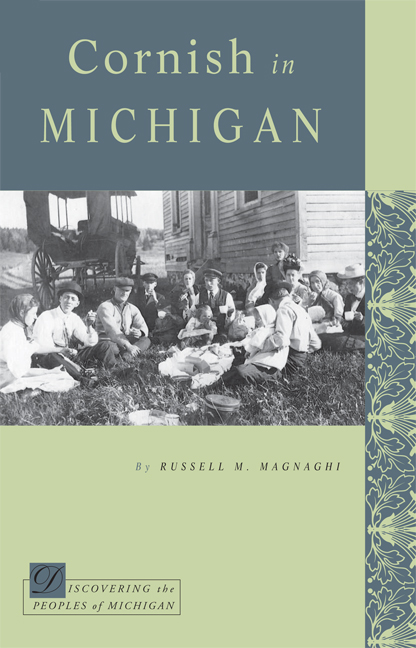 Several ethnic groups have come to Michigan from the British Isles. Each group of immigrants from this region—the Cornish, English, Irish, and Welsh—has played a significant role in American history.
Historic records show that some early nineteenth-century Cornish immigrants were farmers and settled in the Lower Peninsula of Michigan. However, the majority of early Cornish immigrants were miners, and much of their influence was felt in the Upper Peninsula of the state. Many of the underground miners from Cornwall got their start in this region before they migrated to other mining regions throughout the United States.
Hard-working families came from throughout the peninsula of Cornwall, bringing their history, recipes, songs, religions, and other traditions to Michigan’s northern mining country. This nineteenth-century migration brought them to new homes in Keweenaw County, Houghton County, Copper Harbor, Eagle Harbor, and Presque Isle. In the 1830s, newly arrived immigrants also settled in the lower parts of Michigan, in Macomb, Washtenaw, Lenawee, and Oakland counties. The automobile boom of the 1920s sent many of these immigrants and their children to Metro Detroit from the Upper Peninsula, where their traditions are perpetuated today.

Danes and Icelanders in Michigan