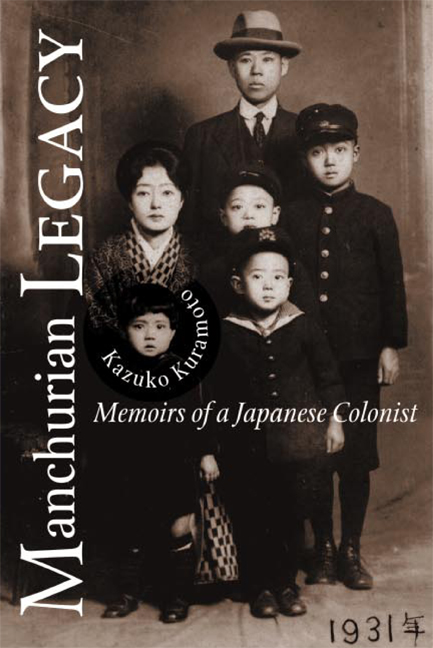 Kazuko Kuramoto was born and raised in Dairen, Manchuria, in 1927, at the peak of Japanese expansionism in Asia. Dairen and the neighboring Port Arthur were important colonial outposts on the Liaotung Peninsula; the train lines established by Russia and taken over by the Japanese, ended there. When Kuramoto's grandfather arrived in Dairen as a member of the Japanese police force shortly after the end of the Russo-Japanese War in 1905, the family's belief in Japanese supremacy and its "divine" mission to "save" Asia from Western imperialists was firmly in place. As a third-generation colonist, the seventeen-year-old Kuramoto readily joined the Red Cross Nurse Corps in 1944 to aid in the war effort and in her country's sacred cause. A year later, her family listened to the emperor's radio broadcast ". . . we shall have to endure the unendurable, to suffer the insufferable." Japan surrendered unconditionally.
Manchurian Legacy is the story of the family's life in Dairen, their survival as a forgotten people during the battle to reclaim Manchuria waged by Russia, Nationalist China, and Communist China, and their subsequent repatriation to a devastated Japan. Kuramoto describes a culture based on the unthinking oppression of the colonized by the colonizer. And, because Manchuria was, in essence, a Japanese frontier, her family lived a freer and more luxurious life than they would have in Japan—one relatively unscathed by the war until after the surrender.
As a commentator Kuramoto explores her culture both from the inside, subjectively, and from the outside, objectively. Her memoirs describe her coming of age in a colonial society, her family's experiences in war-torn Manchuria, and her "homecoming" to Japan—where she had never been—just as Japan is engaged in its own cultural upheaval.

Subjects: Memoirs | Asian Studies
Publication Date: September 30th, 2004
189 pages| 6 in x 9 in
Michigan State University Press
Bios
Kazuko Kuramoto lives in Ontario, Oregon. She taught Japanese from 1979 until her retirement in 1992, when she returned to college and earned her degree from Eastern Oregon State University. She maintains a website that is a companion to her book: www.manchurianlegacy.com

Evolution of Desire
A Life of René Girard