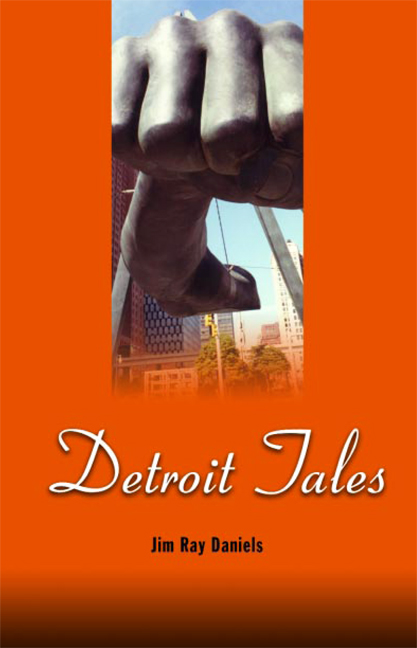 The stories in Detroit Tales are tales about urban, working-class America. People struggle both to remain in the city and to escape the city. The three central motifs of this collection are the city, the workplace, and the automobile. In their cars, people negotiate the territory between work and home. Conflicts arise in the characters’ impulses to veer off their well-worn paths. What can they do? Where can they go? What forces pull them away, and what forces pull them back? The characters search for what can provide spiritual sustenance. Often, the relief from the drudgery of their daily lives is provided in the fleeting dazzle of fireworks or Christmas lights, but they take what they can. If these stories have one unifying theme, it is that escape is not the answer. When the pulls of friendship and love and personal responsibility draw us back to our ordinary homes and our ordinary jobs, we must trust those pulls, and we must lead those lives with as much dignity as we can muster.

From Publishers Weekly:
“Authentic and deeply felt but sometimes clunky, these 12 stories by Pushcart Prize-winning writer Daniels (No Pets) are set in white, working-class Detroit in the 1970s, their characters struggling with heartbreak, aimlessness, financial disaster or the pull of their troubled pasts. In the opening story, "Islands," a mild-mannered man tries to improve life on his block by confronting a drug dealer working there, intimating that he has a gun in his pocket, and is only laughed at in return. In "Christmasmobile," two stoned teenage boys drive a car bedecked with Christmas lights around their neighborhood on Christmas Eve, witness the disruption of a mass by a deranged, despairing local misfit and must be driven home by two young women when the car's decorations drain its battery. In "Cross Country," a narrator recalls a Kerouac-inspired attempt at a cross-country road trip with his friend Jimmy, who dreams of going to broadcasting school in California. The trip ends when a banal encounter with two state troopers mysteriously convinces Jimmy that they have to return home, and that they'll never find the adventure or escape they're looking for. In "Renegade," a smalltime biker, recently returned from Vietnam and living with his parents, invades a high school party with his violent gang. He's about to take a swing at a kid when he realizes, to his overwhelming shame, that it's his younger brother. Daniel's close-up portraits of people living from paycheck to paycheck are believable and well etched. Yet the arcs of these stories are often flawed-they tend to be structured so that the climax comes somewhere in the middle, and overly long denouements sap the stories' energy.”