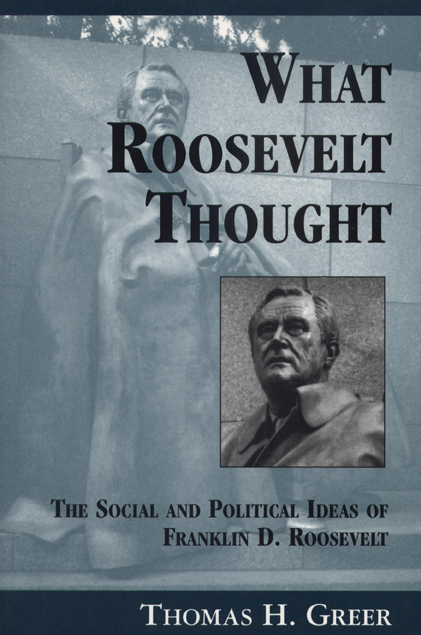 By most assessments, Franklin D. Roosevelt is included in the "short-list" of America's great presidents. He had one of the greatest political experiences of our history, and his ideas were developed during a lifetime of challenge and participation in politics and government. He embodied a national trait and was a practical philosopher. His presidency spanned the Great Depression and World War II. While other books about Roosevelt have tended to isolate his ideas, What Roosevelt Thought is the classic study that shows the unfolding of his views in the context of a larger, coherent philosophy. His views on rival social systems, the United Nations, the Supreme Court, and colonialism, as well as his ideas on religion, human rights, the good life, human nature, and other issues, are presented in the perspective of his life and times.

Subjects: History | Philosophy | Rhetoric
Publication Date: July 31st, 2000
244 pages| 6 in x 9 in
Michigan State University Press
Bios
Thomas H. Greer studied at the University of California, Berkeley, and was Pofessor Emeritus of Humanities at Michigan State University, East Lansing, Michigan; he joined the MSU faculty in 1947 and retired in 1977. His publications include American Social Reform Movements: Their Pattern Since 1865, A Brief History of the Western World, and Classics of Western Thought. Professor Greer passed away in February, 2004.