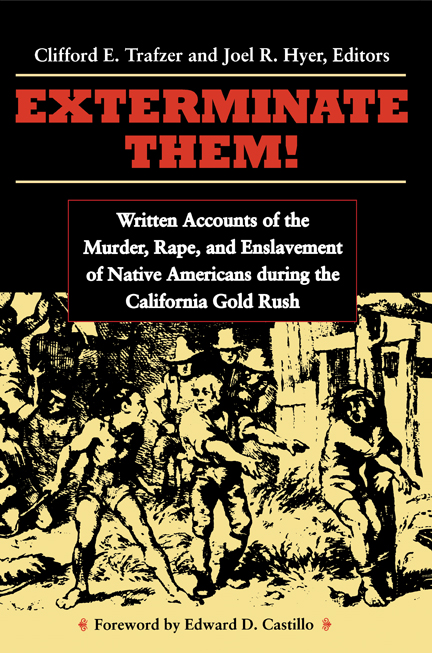 Exterminate Them
Written Accounts of the Murder, Rape, and Enslavement of Native Americans during the California Gold Rush
Edited by Clifford E. Trafzer, and Joel R. Hyer

Popular media depict miners as a rough-and-tumble lot who diligently worked the placers along scenic rushing rivers while living in roaring mining camps in the foothills of the Sierra Nevada Mountains. Trafzer and Hyer destroy this mythic image by offering a collection of original newspaper articles that describe in detail the murder, rape, and enslavement perpetrated by those who participated in the infamous gold rush. "It is a mercy to the Red Devils," wrote an editor of the Chico Courier, "to exterminate them." Newspaper accounts of the era depict both the barbarity and the nobility in human nature, but while some protested the inhumane treatment of Native Americans, they were not able to end the violence. Native Americans fought back, resisting the invasion, but they could not stop the tide of white miners and settlers. They became "strangers in a stolen land."

Death Stalks the Yakama
Epidemiological Transitions and Mortality on the Yakama Indian Reservation, 1888-1964