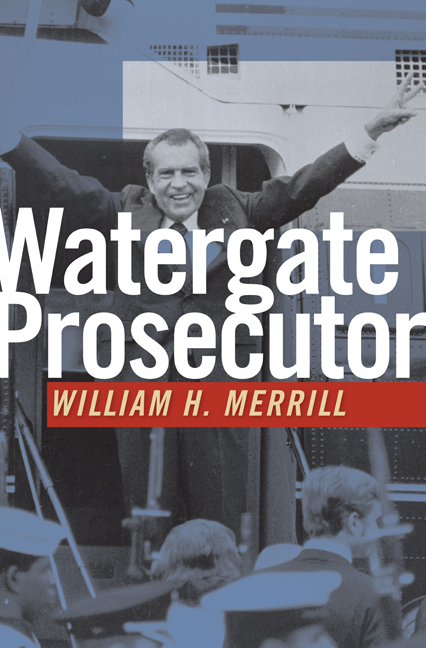 This is the inside story of the Watergate trials.
Written by the ultimate insider who helped change the course of history: William Merrill was the Special Prosecutor who sent the "plumbers" to jail. Not just any plumbers, but the "Nixon plumbers," hired by the White House to "stop leaks" by any means necessary. Officially, they were the Special Investigation Unit. Unofficially, they were the "dirty tricks squad," whose illegal actions eventually caused the President to resign his office. Bill Merrill prosecuted the plumbers. Here, more than thirty years later, he reveals how he did it.
On September 4, 1971, two burglars — later identified as E. Howard Hunt and G. Gordon Liddy — broke into the office of Lewis Fielding, a Beverly Hills psychiatrist, among whose patients was Daniel Ellsberg, a prominent antiwar activist who had recently released to the press the formerly top-secret "Pentagon Papers." On June 13, 1972, five burglars entered the offices of the Democratic National Committee, which were located in the Watergate complex in Washington,
DC. Both of these crimes were eventually traced back to the "plumbers unit," which was directed by John Ehrlichman, President Nixon's top domestic aide. As he convincingly recounts, Merrill sought the job as Assistant Special Prosecutor for one reason: to bring these criminals to justice. In addition, as this revelatory account makes clear, he pursued that goal tenaciously.
Merrill wrote this book in 1978, but never published it. Today, at the age of 83, he is confined to a VA hospital in Michigan, the victim of a debilitating stroke.
In 1974, Merrill was mentioned in the media almost every day during the Watergate trials. Directing a team of attorneys and assistants, he constructed cases against all of the plumbers—and he won every case. "Watergate" continues to reverberate in the American consciousness today. Revelations that the White House had planned and carried out illegal acts fundamentally rocked the nation. In his response to these unprecedented crimes, William Merrill literally changed the course of history. This is his story.
Subjects: History | Political History | American Studies
Publication Date: January 28th, 2008
193 pages| 6 in x 9 in
Michigan State University Press
Bios
William Merrill served as Assistant Special Prosecutor during the Watergate trials. He grew up in an upper-class suburb of Detroit, enlisted in the U.S. Army Air Force in World War II, graduated from Dartmouth College after the war, and earned his law degree at Yale University. In 1968 he served as the Michigan state director of the campaign to elect Robert Kennedy to the Presidency.