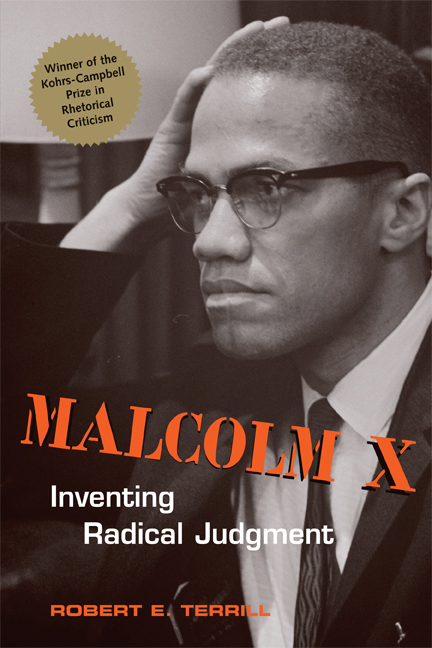 Few figures haunt the collective American psyche like Malcolm X. Hoodlum, convict, convert, prophet, nationalist, and martyr, Malcolm’s life spans the Civil Rights era like an index of America’s racial anxiety. Dozens of books and hundreds of articles have analyzed his life, his work, and the various ways that his image has been appropriated by American culture. Not much has been done, however, to analyze his speeches. This would be a glaring omission in the body of scholarship about almost any public figure, but is especially troubling with regard to Malcolm X. His legacy does not consist of marches preserved on newsreels, legislation passed by Congress, or holidays observed by the state; his legacy consists almost exclusively of his words.
Malcolm X, like any orator, did not fashion his discourse in a vacuum but worked within and modified modes fashioned by his predecessors. Malcolm X: Inventing Radical Judgment begins by exploring the interpretive strategies presented in key texts from the history of African American protest, establishing a spectrum against which Malcolm’s oratory can be assessed. The texts of speeches that Malcolm delivered while he was a minister for the Nation of Islam and the texts of speeches and statements he made after he left the Nation are analyzed carefully to discern the strategies of interpretation and judgment that he enacted and fostered in his audiences. Finally, this radical judgment, presented in and through Malcolm’s public discourse, is re-contextualized by using three disparate theoretical approaches. The purpose of this triangulation is not to contain the rhetoric of Malcolm X within the limitations of these vocabularies, but rather to show that the changing potential of Malcolm’s rhetoric lies, in part, in its iconoclastic refusal to be constrained by definitive boundaries.

Subjects: Rhetoric | Race and Ethnicity
Series: Rhetoric & Public Affairs
Publication Date: November 30th, 2004
255 pages| 6 in x 9 in
Michigan State University Press
Bios
Robert E. Terrill is Associate Professor in the department of Communication & Culture, and adjunct faculty in the American Studies program, at Indiana University, Bloomington, Indiana. In 2005, Terrill received the $10,000 Kohrs-Campbell Prize in Rhetorical Criticism. He was named 2003 Teacher of the Year by Lambda Pi Eta, Communication Studies Honor Society. In 2002, he received the Indiana University Teaching Excellence Recognition Award (TERA). His essays analyzing speeches and films have appeared in The Quarterly Journal of Speech, Critical Studies in Media Communication, and other journals. He has served on the editorial board of several academic journals.