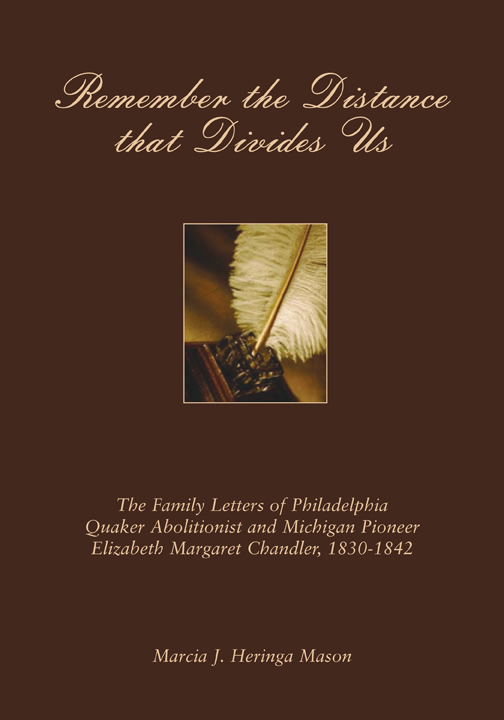 Born in Delaware’s Brandywine Valley in 1807, Elizabeth Margaret Chandler was a young woman who was fully engaged in her time. Leaving comfort and middle-class Philadelphia wealth behind, she headed west in 1830 with brother, Thomas, and an aunt to begin a new life in the wilderness of the Michigan Territory. During the next four years, until her untimely death in November 1834, Chandler became a tireless local activist; at the same time, she participated aggressively in national political discussions about pressing social issues, in particular in the dialogue about the nascent women’s movement and in the debates about Abolitionism as they began to develop in the 1820s and early 1830s. She was ladies’ editor of Benjamin Lundy’s Abolitionist Journal and a contemporary of William Lloyd Garrison. She wrote letters, articles, and poetry that appeared in the Abolitionist press, but at the same time she was a champion for public education at the local level. Within two years of her arrival in Michigan, she had established the territory’s first anti-slave organization, the Logan Female Antislavery Society.
This rich collection of personal letters, most written to family members during Chandler’s brief life in Michigan, provides a remarkable view of the Northwest frontier in the 1830s, as well as profound insights into the ideology and origins of Abolitionism. Her letters also reveal much about the beliefs, attitudes, and actions of a remarkable young woman who some have seen as a precursor to the Grimké sisters.

Subjects: History | Literary Studies | Women's Studies
Publication Date: August 31st, 2004
458 pages| 7 in x 10 in
Michigan State University Press
Bios
Marcia Heringa Mason is a museum administrator with an interest in the lives of nineteenth-century women. She has held positions at the Edsel and Eleanor Ford House, the Henry Ford Museum and Greenfield Village, and the Desert Caballeros Western Museum.